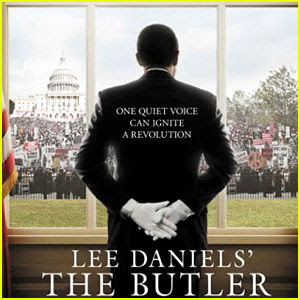 On Thursday morning, at the old fogies' "early doors" film screening, I watched "The Butler" starring Forest Whitaker and Oprah Winfrey. In the British press, this movie has received rather mixed reviews but I thoroughly enjoyed it. Our daughter - Frances - had seen it last week and later  recommended it with unqualified enthusiasm.

The film spans a long period of modern American history - seen largely through the eyes of Cecil Gaines -  a long-serving butler in the White House - whose childhood was spent on a cotton plantation near Macon, Georgia. He became a "house nigger" and this early experience of domestic service prepared him well for his future career.

He met his wife Gloria whilst later working in a hotel and they had two sons. One goes to fight in Vietnam whilst the older son, played brilliantly by David Oyelowo, becomes embroiled in the politics of the civil rights movement.

There are famous characters and famous actors in cameo roles and it is as if Lee Daniels was attempting to paint - in broad brush fashion - a portrait of post-war America. Quite a tall order for a film that lasts little more than two hours.

In real life, I am not entirely convinced that black Americans have yet achieved the equality that Martin Luther King dreamt about but surely things are much better than they used to be. "The Butler" is a positive affirmation of that quest and it speaks of times that people of my generation from around the world are very familiar with - from Kennedy's assassination to the election of Barack Obama. Like Cecil Gaines we have all been witnesses to this planet's recent evolution and in the end we can only hope for the best.