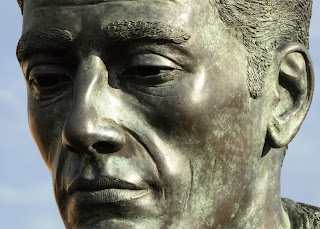 Sheffield was built on steel. During the nineteenth century,  the biggest steelworks complex in the entire world was developed to the north east of the city - in an area known as Meadowhall. Nowadays, the very same site is occupied by a stonking great shopping centre which is visited by pilgrims every day of the year apart from Christmas Day. They park their cars and with bowed heads wander into their marble temple to pay homage to Mammon.

At one of the entrances, they might stop to briefly admire this bronze trio:- 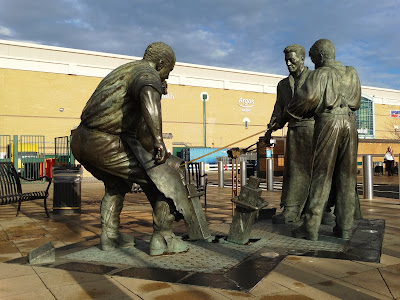 It's a sculpture by a Canadian artist called Robin Bell. He created it over the winter of 1989-1990 and it is known locally as "The Steelmen" though its real title is "Teeming". It celebrates Sheffield's steel making history and commemorates generations of hardworking people who devoted their lives to the manufacture of steel - a metal that would form the backbone of Britain's industrial triumphs and its empire. Steel was there in our canal system, the railways, tramlines, shipping, major building projects and of course in the wars we fought. It wasn't in London that Britain built its greatness but in places like Sheffield and Birmingham, Manchester and Cardiff - hard-working cities where things really got done. 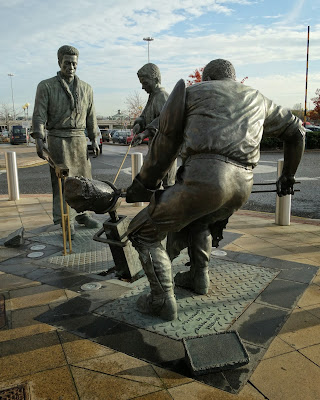 During World War One, my grandmother - Phyllis White - worked in one of the great steelworks - helping to produce shell casings. She was only fourteen when she volunteered. Many other Sheffield and Rotherham women worked in the steel factories during World War Two. It is heart-warming to note that another statue will soon be erected in Sheffield to honour these women of both world wars whose efforts in those hellish steelworks have until recently largely been overlooked by historians. They say they are going to call the new statue "Women of Steel".
- November 30, 2013