Chesterfield in North East Derbyshire is one of Sheffield's smaller cousins. Yesterday I spent three hours just walking around the town, ticking off one kilometre boxes for the Geograph project as I clicked away with my (sub-machine gun)  camera.  By the uniquely named Knifesmithgate in the town centre I noticed three young people passing the time of day on the corner where I had stopped to munch a cheese roll. There was a young man of around twenty and two young women of a similar age. All three were smoking cigarettes:-


It was like a street play - a medieval mystery play perhaps - and the next short scene involved the young man boasting about how he had got drunk and smashed somebody's "f***ing face in". The girls seemed impressed. And all of this unfolded in the shadow of Chesterfield's Parish Church with its "famous" crooked spire.

That spire has directly inspired the local council's logo, the names of two public houses and even the local professional football club - Chesterfield F.C. is nicknamed The Spireites. Here are five shots of what  I am talking about:- 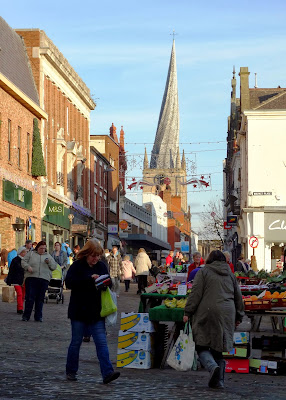 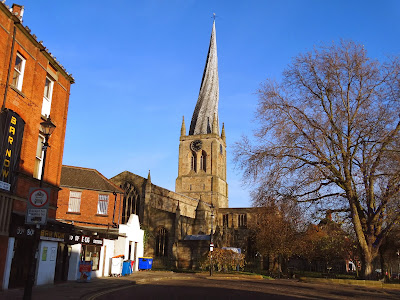 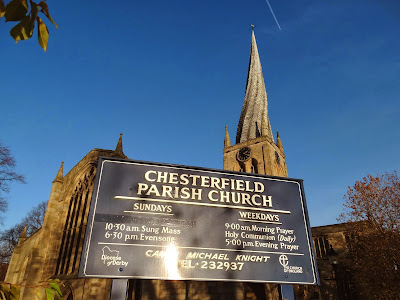 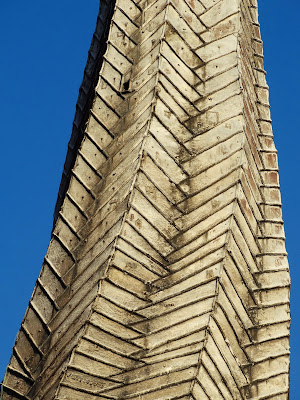 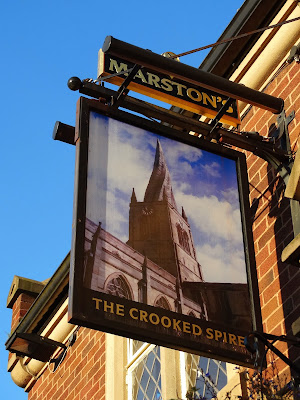 Don't get me wrong. The overheard conversation is not meant as a distilled representation of the townsfolk. I rather like Chesterfield - its human scale, its honesty, its friendliness and its nice location. Many times when I have walked in the countryside to the west of Chesterfield I have been able to make out the crooked spire from miles away. A real landmark. And its traditional outdoor market is famous in the region. It would, I am sure, be a good place to live - even though it has one enormous downside - it is not in Yorkshire!
- November 28, 2013