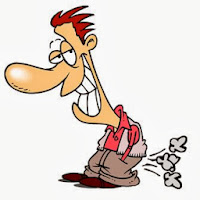 More than fifty years ago, my oldest brother Paul - God rest his soul - lay on his back on our living room floor, brought his knees up to his head and before emitting a resounding fart, lit a match and positioned it close to the blow hole. There was a  flash of blue green flame followed by howls of laughter.  Paul was always scientific like that. Perhaps his failed PhD project should have focussed on flatulence rather than locusts which inconveniently kept dying on him.

On average, every human being in the world farts fourteen times a day. We all do it. From Pope Francis to Miss World and from Earl John Gray of Trelawnyd to bonny babies in their cribs. When I was a boy, if my mother heard me pass wind she'd frown, "What do you say?" and I'd automatically respond "Pardon me" but later - when I was a rebellious teenager - my cleverdick reply would usually be "I've just farted!" I mean - why should we ever be sorry about our farts? They happen.

The word "fart" comes from the Old English "feortan" (meaning "to break wind"). Although the word "fart" is "not in decent use," it was used by the likes of the great medieval English poet Geoffrey Chaucer. I am not sure if there is a polite alternative word for a single "fart" as "flatulence" is a general term for the process of passing wind. After all, nobody says "I've just flatulated" or "I have just performed an act of flatulence" so to me "fart" is a useful noun as it describes a single trumpet blast. Mind you, some farts can whine like a wounded animal and some are like machine gun bullets going off in quick succession.

Over 99% of the volume of flatus (intestinal gas) is composed of non-smelly gases.These include oxygen, nitrogen, carbon dioxide, hydrogen and methane. The remaining trace compounds (just 1% of total volume) give flatus its smell. Recent evidence proves that the major contribution to the smell of flatus comes from a combination of volatile sulphur compounds. It is known that hydrogen sulphide, methyl mercaptan , dimethyl sulphide, dimethyl disulphide and dimethyl trisulphide are all present in flatus. The scientific study of this area of medicine is termed flatology so a scientist who specialises in the field is known as a flatologist though personally I don't recall ever meeting one.

All over the world, farting makes people giggle. It's as if we don't quite know how to react to it even though it's been an everyday feature of human existence since the dawn of time. Having been out of teaching for some time now I can reveal that one of my favourite discipline methods for back row ne'er do wells was to occasionally drop particularly noxious silent farts at the back of the classroom and then nonchalantly stroll back to the front. Moments later, the offending gases would assault unsuspecting nostrils and the lairy pupils would blame each other, protesting "It weren't me!" etc. - forgetting that their erudite English teacher had been to the back only moments before. It only went to prove that some of them really did have the memory span of a goldfish.

There's so much more to be said about farts and farting but of course the subject is taboo. Even as I wrote this post I recognised that the CIA in Washington and GCHQ in Cheltenham would be monitoring every word. Hiya guys! ...THWARRP!
- November 13, 2013