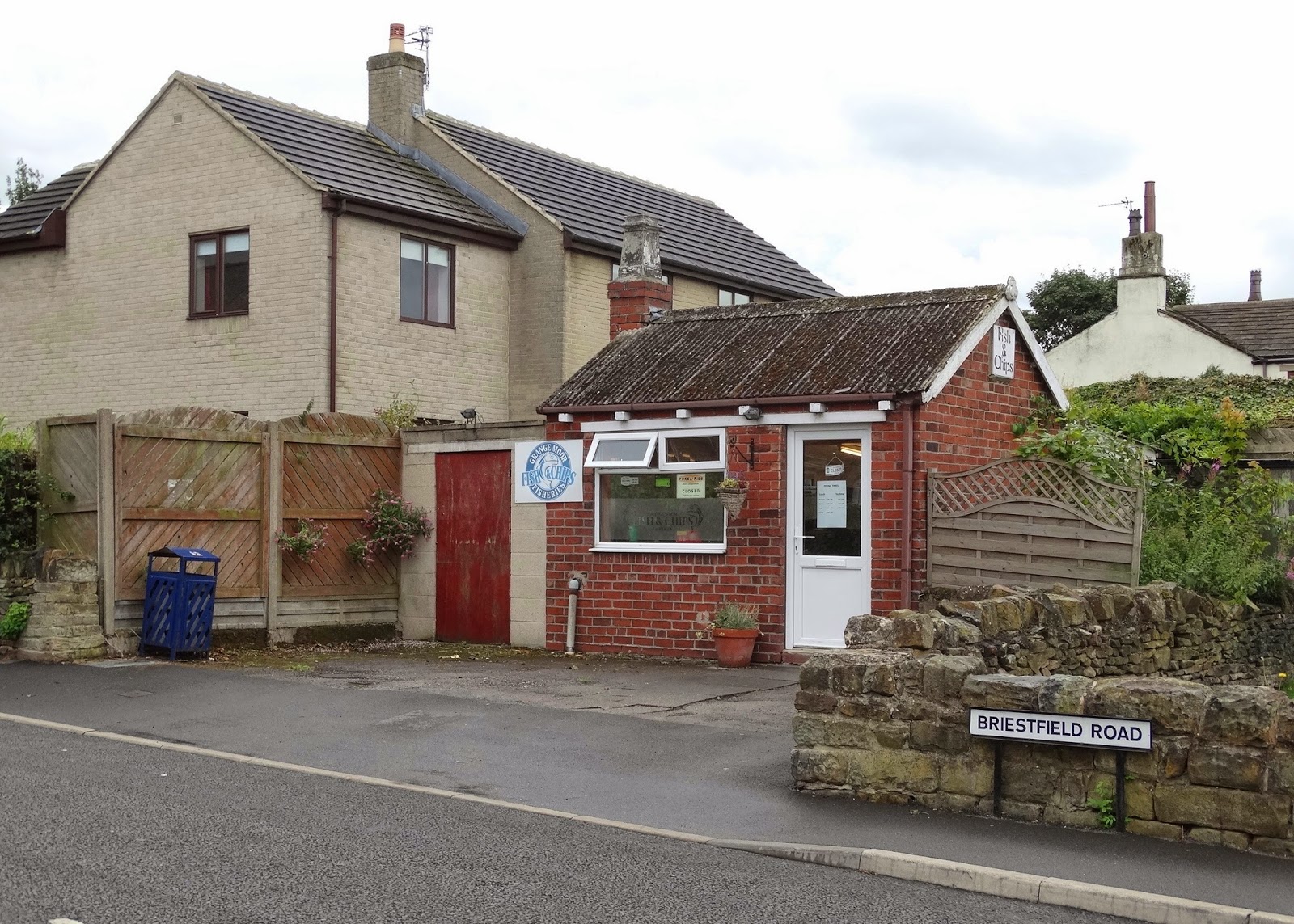 Above - the little fish and chip shop in the village of Grange Moor which is south east of Huddersfield and around an hour's drive from Sheffield. On Friday unforecasted rain was spitting when I parked up in Grange Moor and I was in two minds about whether to undertake the walk I had planned. Instead I went in that little takeaway place and asked for a small bag of chips.

"D'ye want bits on?" asked the middle-aged woman behind the counter. She was wearing a white catering hat - like a trilby.

For those who are not versed in the intricacies of fish and chip culture, may I explain that "bits" (called "scraps" in East Yorkshire) are  rescued small  bits of batter from the frying tank. They are golden and crunchy, very unhealthy and delicious on top of a bag of chips with a sprinkling of salt and malt vinegar,  She offered me a full scoop of "bits" but slightly horrified, as I considered such a  wave of cholesterol, I asked for half.

I sat in my car munching those delicious chips as rain piddled down but by the time all the golden fingers had descended to Pudding's  miniature belly, the rainstorm had passed by and I decided to risk the planned walk. With boots on I set off for Cockermouth Farm on Flockton Moor, thence to Six Lanes End and onwards to the hamlet of Crawshaw. Along to Kirkby Grange Farm and Furnace Grange and then to the village of Flockton which boasts one of the oldest pubs in Britain - "The George and Dragon" - dating back to 1485. Later it became a coal mining community with functional miners' cottages spreading west from the original village.
Past the church and then northwards through New Park towards Grange Hall. At New Park, it took me a while to realise that the caravans around the big field's perimeter belonged not to middle class caravanners but to travelling families or gipsies. There were mongrel dogs on ropes and flat bed tarmac and scrap metal trucks and tree-lopping machinery. No raggle taggle gipsies here, with golden earrings dancing round a campfire to the sound of a violin.

The rain was returning by the time I reached Denby Lane but I was nearly back at my car in Grange Moor by then. Between the houses above a green I spotted this odd construction:- It is called "The Dumb Steeple" and intriguingly nobody is quite sure what it is or was. It was repaired in 1766 and it used to have a stone ball on its pinnacle. In the 1840's striking textile workers had rallies here and of course there was a time when there were no houses in the area. One respected Yorkshire historian claims that it was once a place of pagan worship and the current construction may have replaced a much earlier edifice. More pictures from my grey sky jaunt below:-
- August 17, 2014