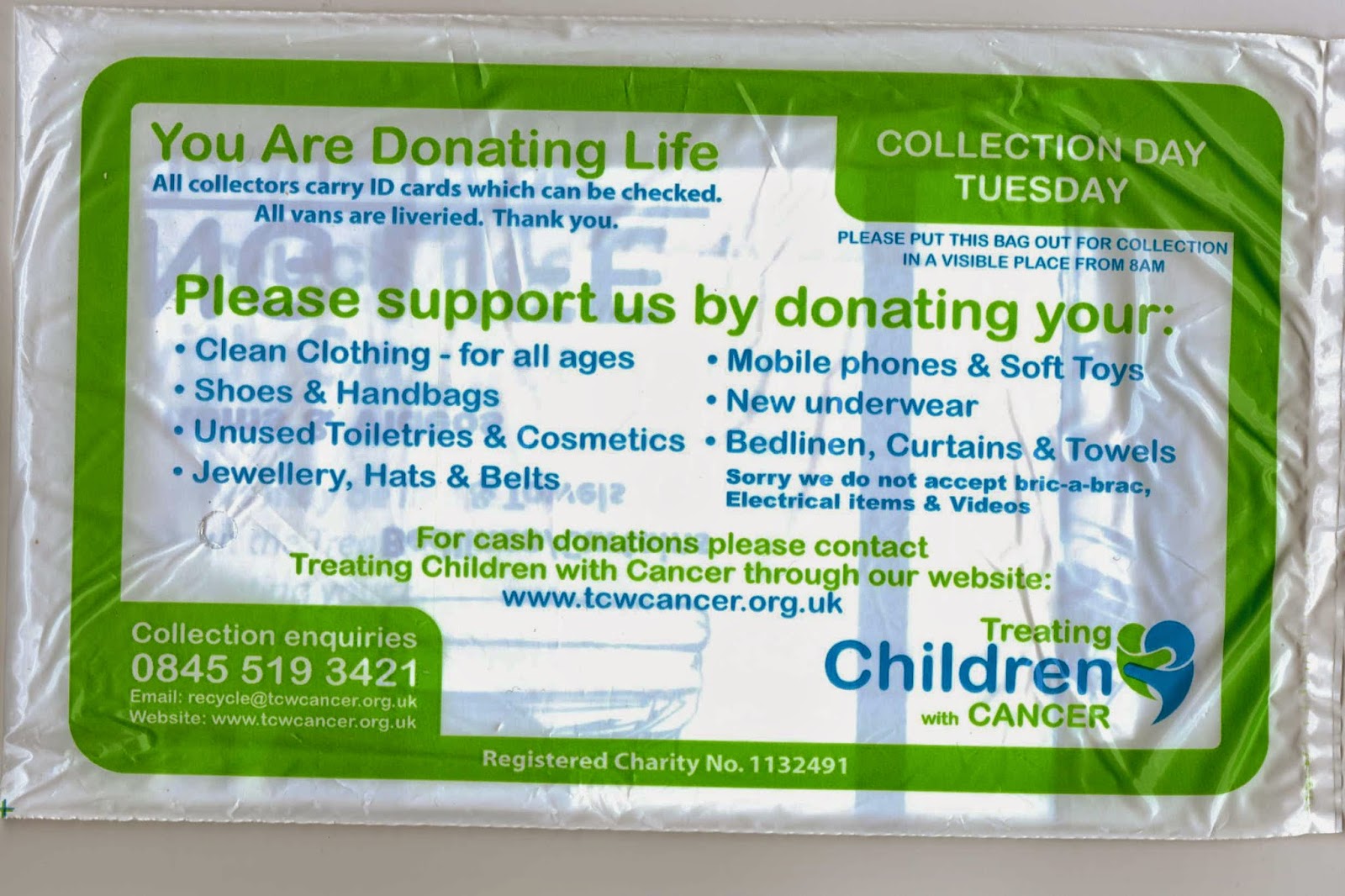 Another charity bag dropped through our letter box today. We never put any old clothes or other unwanted items in these bags. Instead we use them as bin liners. Don't get me wrong. Shirley and I are not averse to supporting charities and I have often dropped stuff off at either the "Mind" shop on London Road or the "Oxfam" shops at Broomhill and Nether Edge.

As I was immobilised today with a bad knee, I had time to investigate the senders of today's bag - "Treating Children With Cancer". To begin with I wouldn't class "cancer" as a treat so the name of this charity is somewhat thoughtless.

I discovered that "Treating Children With Cancer" is based at a small industrial estate in Huddersfield. They have been in existence since late 2009 and they have a rather small turnover. Most of the money that they claim they make from street collections goes into costs such as maintaining their Huddersfield depot, vehicle expenditure and staff wages. This leaves very little to give to other charities such as "Macmillan Nurses" or "Cancer UK" which are both big and effective charities dear to the hearts of the British people. It seems that "Treating Children With Cancer" use a significant amount of excess money to pay for clowns to entertain child cancer patients in hospitals - at least that is what they say they do.

One of the lead directors of the charity used to run a company called "Ragcycle" that went out of business in 2009. This wasn't a charity but a commercial venture that aimed to make money through recycling old clothes - often sending them to Third World countries for profit.

The "Treating Children With Cancer" website is rather unconvincing. It never states why the people who operate this approved charity have chosen to devote so much time to this particular cause. What is it that motivates them? Did a young family member suffer from cancer? No. It just doesn't ring true. There's something quite fishy about it all in my opinion though I would be pleased to discover that my suspicion is groundless.

Whenever charities run regular bag collections, a lot of potential charity money is lost in paying for the collection service. Walking into a charity shop with items for donation cuts out the middle men and ensures that much more of what you are presenting translates into funding. So we shall continue to use these bags for lining our kitchen bin. Additionally,  I hope that one day the truth about "Treating Children With Cancer" will be revealed.
- August 23, 2014