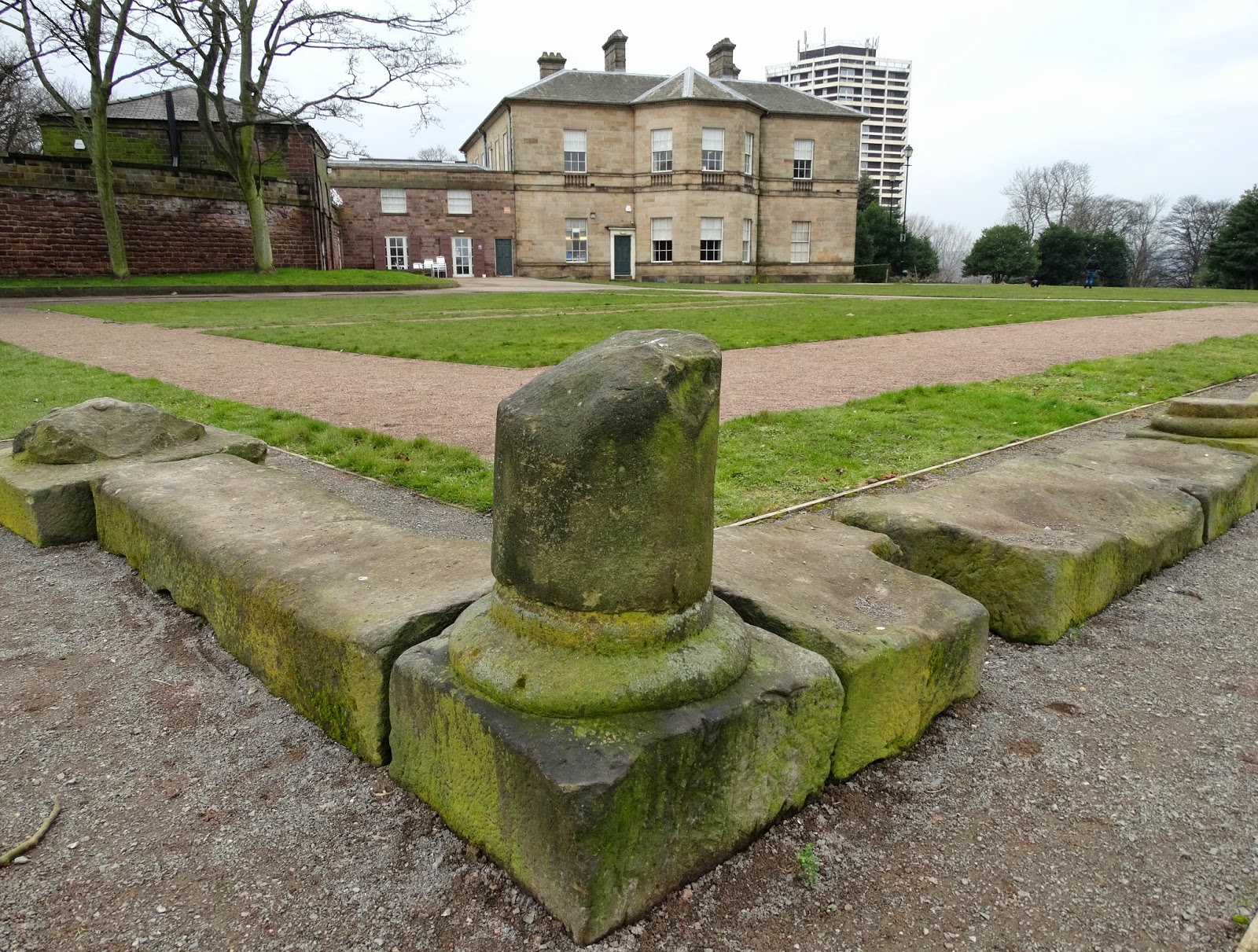 Long ago, before there was such a country as England, Rotherham sat at the border between the ancient kingdoms of Mercia and Northumbria. Going back even further in time to the first century AD, the Romans built an important fortress at Rotherham. It was at the northern edge of the Roman Empire long before they pressed further northwards to settle in Northumbria and build Hadrian's Wall.

Today the Rotherham fort is known as Templeborough but tragically the site was obliterated in 1916 as the steel company Steel, Peach and Tozer expanded their works as part of the effort to win World War One. Though she probably didn't know it, my grandmother Phyllis White worked in the very cavernous manufacturing shed which was quickly built upon the Templeborough fortress site. She belonged to an army of women who produced shell casings.

In 1916, a lot of the old stones had already disappeared from the Roman fortress. They had been purloined over many centuries and then the steel company began to move away the earth - destroying so much evidence of a Roman military settlement that had been in use for almost four hundred years. Fortunately, some bigwigs at Rotherham Council realised what was being lost and sent in a team of archaeologists. They only had a few weeks in which to properly conduct a final survey of the site and rescue as much archaeology as they could. By the way, there had been some earlier digs during the nineteenth century.

Some of the evidence collected in 1916 ended up with the British Museum in London but a lot of it remains in Rotherham - housed at Clifton Park Museum. I was there today.

Behind the museum there are many old stones that were once part of Templeborough's granary building. Having a large food store was vital for maintaining hundreds of Roman troops - many of whom came from Gaul. They stored dried meats and fruit as well as various grains.

Inside the museum there's Roman pottery, weaponry, domestic objects such as tweezers, photographs of the desperate archaeological dig back in 1916 and the broken remains of four Roman gravestones:- 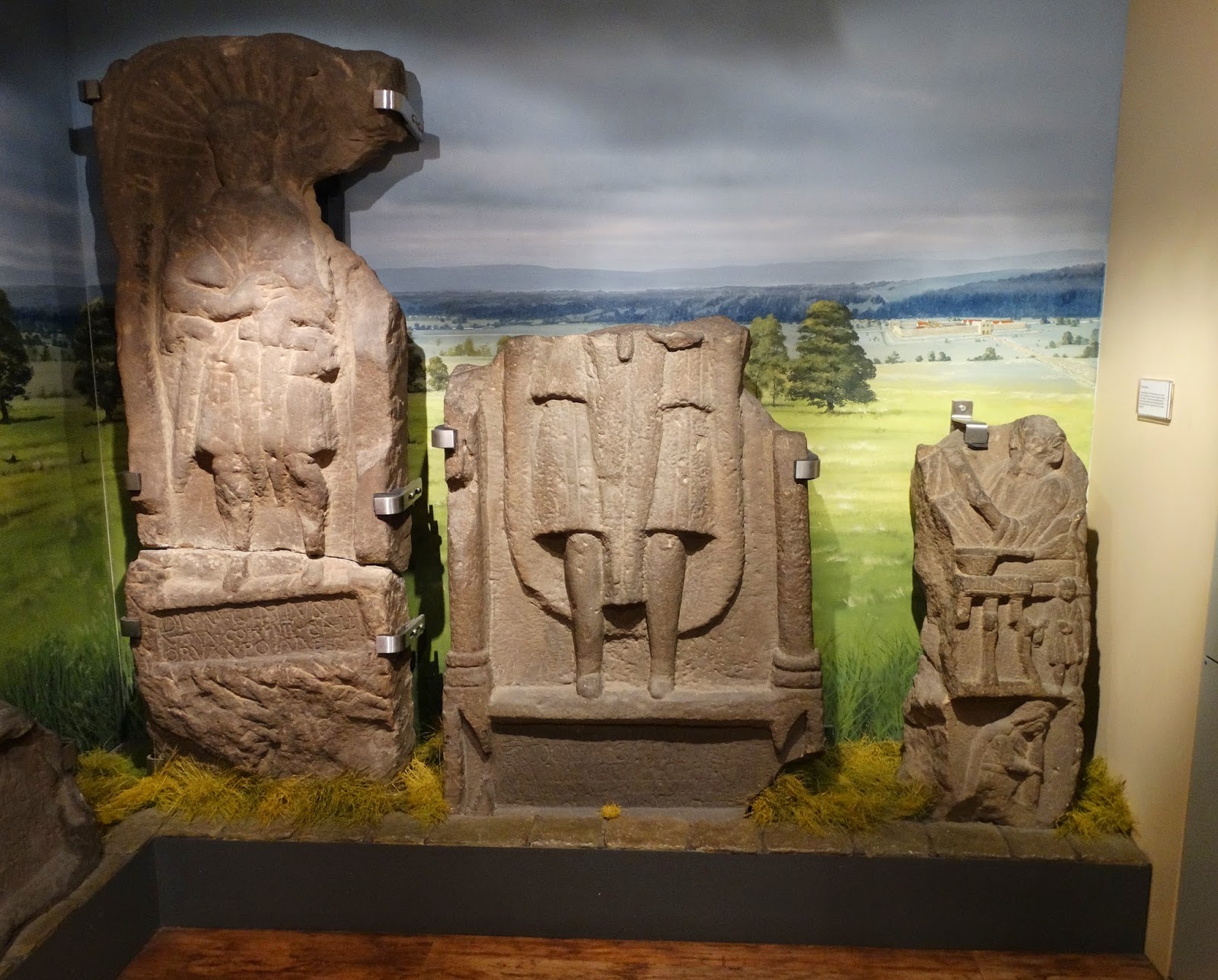 The base of the middle stone is inscribed with these words:-
DIS MANIBVS CROTO VINDICIS EMERITO COH IIII GALLORVM ANNORVM XXXX MONIMENTVM FECIT FLAVIA PEREGRINA CONIVNX PIENTISSIMA MARITO PIENTISSIMO TITVLVM POSVIT
Which means:-
"To the spirits of the departed and Crotus Vindex, veteran of the Fourth Cohort of Gauls, forty years old, this monument was made and its inscription set down by Flavia Peregrina a most faithful wife for a most faithful husband".

Today there's nothing to see at the place where the fortress once stood. It is really very sad but at least some objects were rescued and much is known of the site and of its importance in advertising that the Romans had arrived and they were not going to be messed with. 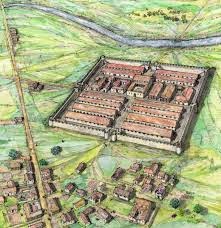