Five days on The Isle of Man but home tomorrow afternoon on the 3pm ferry to Liverpool. Today was Shirley's umpteenth birthday and I was the perfect husband. Soft boiled eggs in bed with a mug of Yorkshire tea and buttery toasted soldiers to dip into the golden yolks.

Then when we were ready, I drove milady along the TT motorcycle route to the slopes of Snaefell - the island's only mountain. There's nothing like scaling a mountain on your birthday so that was a special surprise I had planned for her. I know that all the huffing and puffing and complaining on the way up was but a funny pretence.

Later, for lunch, I led her to the convenience store in Kirk Michael where she picked a chicken and sweetcorn roll for lunch with  a bottle of Fanta Orange and a packet of salt and vinegar crisps. We consumed  our chosen victuals on a sunny bench overlooking The Irish Sea. 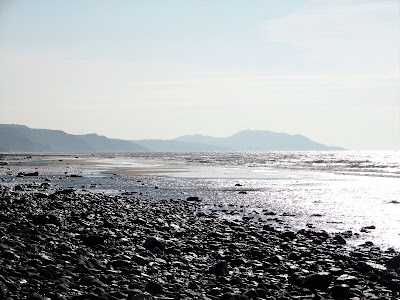 But in the evening we headed out to a restaurant on the Douglas seafront. Trip Advisor lists it as the fifth best place to eat in the town. It's called Jaks Bar. I have no idea what happened to the "c" or the apostrophe. Anyway, we enjoyed perfect rump steaks, chips and salad before heading off to "The Manor Hotel" for a couple of drinks.

I had a pint of the local beer - OKells. It's a lovely brew. I wanted to purloin a beermat as a souvenir of our time on The Isle of Man but the honest angel inside me said that I should ask the landlord first. I went to the bar and asked if I could buy the beermat. He was astonished that I was even asking.

We were about to leave when he dashed from the store room with a brand new OKells beer glass which he presented to me and then as we were getting in the car to leave he came rushing out with a second, smaller OKells glass which he described as a "lady's glass". What wonderful kindness and he didn't even know it was Shirley's birthday!

By the way, I bought her a new handbag, a small bottle of wine and a box of chocolates as birthday presents and it was a nice day for both of us. I first met her when she was twenty years old. We have shared so many birthdays together but this was an especially nice one.