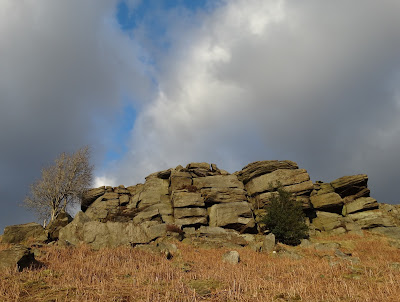 Last Sunday in the late afternoon, Shirley fancied a little country walk so I whizzed her up to the little car park at Dennis Knoll. We donned our boots and headed for Stanage Edge at the only point where it is traversed by an old track. The track is called Long Causeway and in past times it was used by Romans and later by jaggers and drovers moving goods or animals across the country. The Romans were in this area mostly because there was lead in the Derbyshire hills. A lot of it was shipped back to Rome and some was even discovered in the ruins of Pompeii. 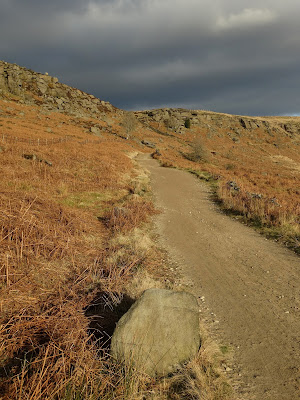 Nowadays the track is mostly used by ramblers and mountain bikers but occasionally vehicular access is needed - especially when rock climbers have had painful trysts with gravity but also when the grouse shooting brigade are lusting after those cackling and unsuspecting moorland birds. 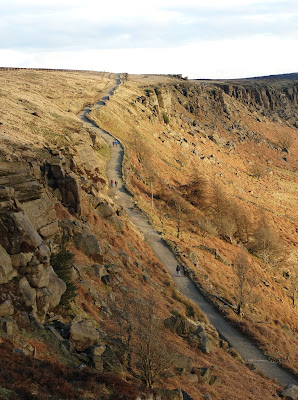 We walked for about an hour, up The Long Causeway and then northwards along the millstone escarpment. The light kept changing as clouds passed and evening approached and on the way back home for a late Sunday roast, I snapped the sun setting over the southern bulge of Stanage Edge. It was all a nice memory of the outdoors for Shirley to take into her working week  at the medical centre. And that is all this little post is about. Full stop or - as Americans say - period. 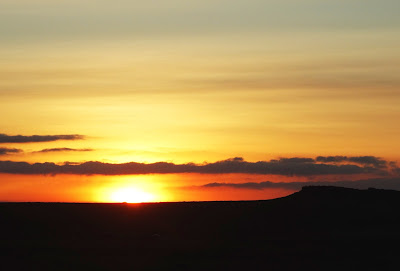