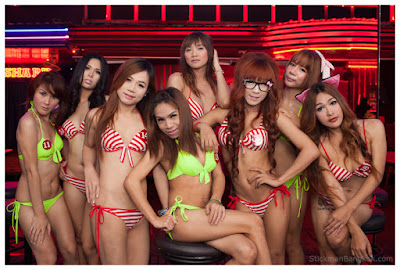 In two spells, I spent almost a year working in Thailand. As time passes, some of my memories of South East Asia are dissolving. Other memories remain. I contend that we have no control over the things we remember. The reasons for cerebral selection are mysterious. They always have been.

When some people think of Thailand the term "ladyboys" will frequently arise - often with a little titter and raised eyebrows. Personally, I have got nothing against ladyboys. Like those memories I just spoke of, effeminate young men have little control over who they become.

Thailand is not awash with ladyboys. It's  not as if every other fellow you pass in the street is proudly walking along, swinging his handbag and happily displaying his feminine side. In fact, most Thai men are like Yorkshiremen - masculine, their veins coursing with pure testosterone - like Clint Eastwood in "Pale Rider".

When school photographs were taken at St Stephen's School, a team of professional people arrived with their equipment. They were all in the company uniform and the leader was an elegant,  shapely, coiffured and expertly made up ladyboy. He or she was good at his/her job and comfortable with his/her ladyboy identity. It wasn't fancy dress. It wasn't a joke.He/she was being who he/she needed to be - accepting the hand that life had dealt out.

Acceptance. In some respects you might say that the Buddhist values  that underpin everyday life in Thailand make it easier to come out as a ladyboy. With a few reservations, Buddhists are better at accepting differences, better at accepting disaster and better at living in the moment. You don't get many ladyboys in Saudi Arabia.

Anyway, all of the above was just a preamble to sharing the following memory of a particular ladyboy.

It was just after midnight one weekend when I was walking home to my little apartment, by the side of one the main arterial roads that heads for central Bangkok from the north of the city. In the daytime the road is choked with traffic but that midnight it was relatively quiet. Ahead of me was a concrete footbridge over the road and at its base there was a lone figure.

He/she was a ladyboy but unlike any other ladyboy I had seen before. He/she was built like a Welsh rugby player. As tall as me, with forearms like Popeye the Sailorman and thighs like tree trunks. Whereas most ladyboys are experts at applying make-up, this one appeared to have had his/her make up applied by a chimpanzee. It was heavy and badly smudged. He/she was wearing a shapeless but sparkly gold sack and size eleven high heels. 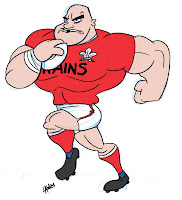 There was nobody else around. When I reached the footbridge this Ladyboy from Hell sought to engage me in conversation. There followed a tirade in the Thai language - delivered at Volume 7 and he/she simply ignored my protestations that I was English and didn't speak Thai. He/she appeared mentally disturbed or crazed by mind-bending drugs. It was hard to tell. He/she pushed me and then attempted to grapple with me. She/he  was wearing an aroma called I believe SBO - Stale Body Odour.

I just wanted to get away. I was not in the mood for being raped by a crazed Welsh tighthead prop in a glittery sack. I pushed back and yelled  my own tirade of English expletives. The Ladyboy from Hell was suddenly startled and stepped back against the fence. I marched away, leaving the confused lone figure behind. Rejection can be hard to suffer.

So it seems that not all ladyboys are demure, girlish figures, preened and plucked like catwalk models. Whenever the word "ladyboy" crops up in the future I will surely recall that feisty midnight encounter by the concrete footbridge. And thankfully, I lived to tell the tale...
- March 13, 2016