Some fellows are petrolheads but I am definitely not. "Top Gear" always had me looking for the remote control. I would rather watch a documentary about chocolate rabbits than a bunch of overgrown schoolboys racing around aerodromes, excitedly heehawing like donkeys.

No. To me a car is something to transport me safely from point A to point B. It is best when that car is efficient and resistant to breakdown. Fuel efficiency is also a desirable factor. Oh and I don't like black or white cars because they seem to become dirty too quickly between car washes.

All of this is just a preamble before the following news bulletin - We are getting a new car today! My current car is a Seat Ibiza in a rather nice shade of marine blue-green. I have had Bertie since 2009 and on the whole he has been a good servant. He recently carried us to The Isle of Man where he travelled up hill, down dale and on to the headland at Point of Ayre. See below:- 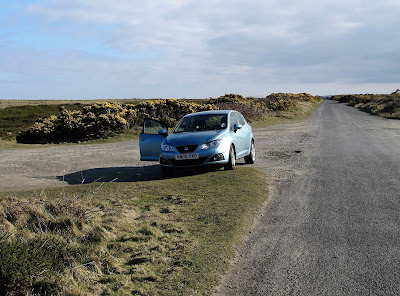 But today I shall say goodbye to Bertie. He had one or two issues and will soon need a couple of new front tyres and a cambelt as well as his annual service. It was time to get rid and besides I had been holding back a suitcase filled with cash ready to purchase his successor.

The new car is "sleek silver" and it's a Hyundai i20 with a 1.4 engine. I wasn't planning to get a brand new car but the deal on this one was a no-brainer as they say. He hasn't got a name yet. Hyundai is a South Korean company but I notice that the new car was manufactured in Turkey so I might call him Mustafa Kemal Atatürk after Turkey's first president... or possibly Clint in order to raise awareness of a certain little chocolate rabbit's ongoing predicament out in the colonies.
- March 31, 2016