Probably there isn't one simple answer.

The first art gallery I ever visited was The Ferens Art Gallery in Hull. Many years had passed by since I last visited it but I was back there on Saturday morning.

The place was heaving with visitors - rather like a popular London exhibition. Many of them were there to see a new photographic display by Spencer Tunick in which hundreds of naked Hullensians gathered at several city locations. Often their bodies were painted blue to suggest the sea:- 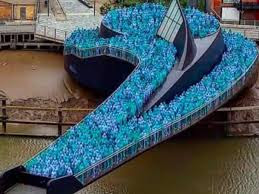 In the gallery's vestibule there was a pile of what appeared to be stones:- 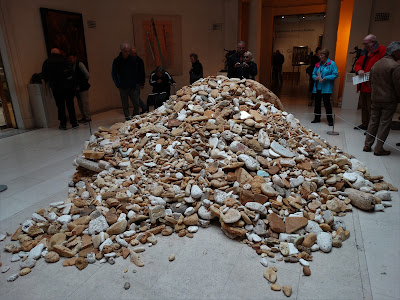 What do you think of it? Is it Art?


I kind of like to observe natural things in gallery situations. A different context can make you see things differently. But that pile of rocks wasn't a pile of rocks at all. It was a pile of pieces of sea-battered polyurethane foam that the artist had gathered from different coastal locations. That makes you think differently about the pile.

The artist-collector is Alexander Duncan and he calls this piece "Cove". He said of it, "Lost in the sea, these hyperobjects have returned to the land reminding us of the waste and pollution we are all responsible for".

Only a century ago, no such material could be found around the British coast but now it's everywhere. Even in the vast Pacific Ocean millions of plastic bags and bottles are floating, washing up on deserted islands or entering the food chains of precious marine life. Without words, Alexander Duncan's "Cove" makes you stop and think - perhaps we don't deserve to be the guardians of this beautiful planet. We continue to ruin it, thoughtlessly, arrogantly, stupidly...
- April 24, 2017