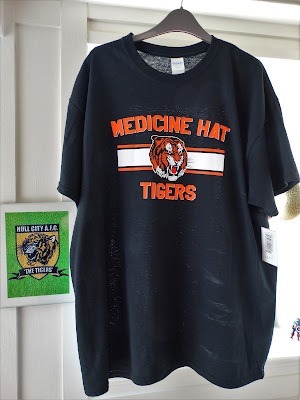 I remember my father Philip. When he was sixty three, the age that I am now, he would never have worn a T-shirt. When he dressed in the morning he put on  a formal shirt with a collar, a tie and if the temperature was chilly a V-necked jumper. T-shirts were for young people.

Even when digging the vegetable plot, he would still wear his shirt and tie. The only time he loosened up and donned plain cotton polo shirts was when he was away from home on a warm holiday.

Dad died in 1979, long before internet and mobile phone technology swept The Earth .like a modern plague or a wave of light - depending on how you look at things. He would have been amazed that this month  his sixty three year old son went online to access the website of Medicine Hat Tigers ice hockey team in Alberta, Canada..Once there, I ordered and paid for an XL supporters' T-shirt.

It arrived yesterday - all the way from Medicine Hat. Another stylish T-shirt to add to my little collection. But isn't it amazing that we can do things like this nowadays? When Dad was my age, it would have been exceedingly difficult to acquire a Medicine Hat Tigers T-shirt. There would have been letters, crackly telephone calls, an international bank transfer and oodles of time. You would have had to be very determined.

You might imagine that I am a fan of Canadian ice hockey but you would be wrong. I have only ever attended one ice hockey match and I found it rather tiresome (Sorry Red!). There was far too much scoring going on for my liking and too many stoppages. So why Medicine Hat Tigers? Simply because of the tiger image and the word "Tigers". It is the same nickname proudly borne by Hull City AFC - the football team I have loyally supported since Dad first took me to see them when I was nine years old.

Think of the new T-shirt  as a fashion statement. If you would like to order some cool Medicine Hat Tigers apparel of your own, go here.
- April 26, 2017