In medieval times, the idea of undertaking a pilgrimage was widespread. In The British Isles alone there were several well-trodden pilgrim routes that saw people walking for many days to pay homage to a saint, a holy well or a Christian martyr. Making such a pilgrimage would surely supplement the acquisition of holy merit and help to secure a pew in heaven itself.

One such pilgrimage site was Ynys Llanddwyn or Llandddwyn Island on the south west coast of Anglesey. It is rich in legends and is especially associated with St Dwynwen - the Welsh patron saint of love who lived during the fifth century. 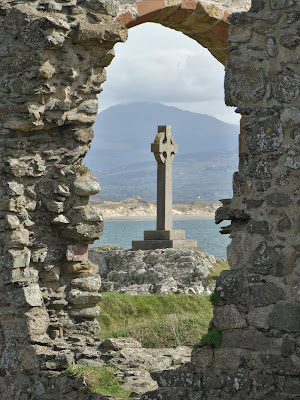 Pilgrims would come from far and wide to pay their holy respects. January 25th is St Dwynwen's Day in Wales so of course it was especially propitious to visit the remote tidal island on that date.

The pilgrimage habit was severely curtailed by Henry VIII's purges in the middle of the sixteenth century. Little did he know that in the twenty first century, new pilgrims would arrive in motor vehicles and pay £4 to park in the Newborough Forest car park before striding along the beach to Ynys Llanddwyn which also boasts two lighthouses, a row of coastguard cottages, a cross dedicated to St Dwynwen and the ruins of St Dwynwen's Church. 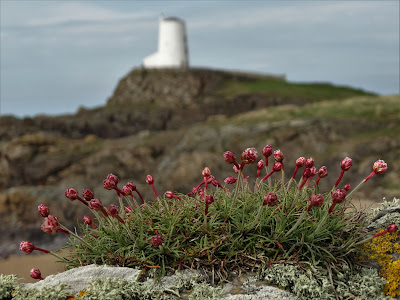 Yesterday we joined the holy daytrippers, eschewing the typical hardships of dedicated medieval pilgrims. No sleeping in hedgerows for us nor bleeding feet and no begging for food to sustain us on our journey. Llanddwyn Island is a lovely, atmospheric place, looking out over the mouth of the Menai Strait to Snowdonia. 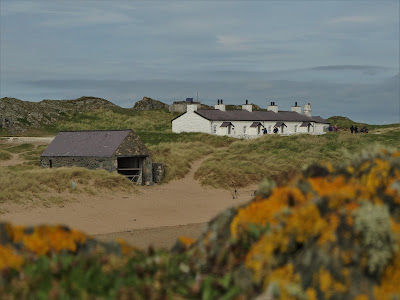 It was a joy to go there. Today we pottered about in Holyhead before a visit to Llynon Mill - Wales's only working windmill. Tonight we shall have a farewell to Anglesey meal at "The Black Lion" in nearby Llanfaethlu. It's quite pricey but the food is excellent. We visited it on our first night here. A return visit will, I guess, be like a culinary pilgrimage. 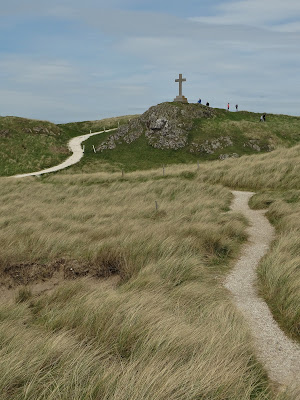