Saturday on The Isle of Anglesey and what a beautiful day it has been. At eight fifteen I pulled up the master bedroom blinds at  Llynon Lodge and this is the scene I beheld:- 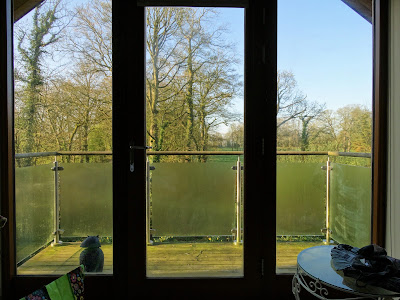 Such a diamond day in shirt sleeves. After breakfast, we jumped in the car and tootled off down the west coast of the island. The landscape was bathed in gorgeous sunshine. Lambs frolicked in emerald green pastures and the gorse bushes shone a bright rich yellow.

We headed for Treaddur Bay on Holy Island which is so close to Anglesey you could be forgiven for failing to realise that it is indeed an island in its own right. I took several photographs of an old hotel perched on a rocky promontory before we headed further up the coast to South Stack. 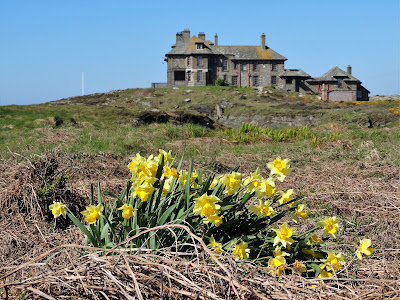 Along the way we met a retired train driver called Bob Grump. He was sitting on a sunlit bench admiring the view. He told us he had sat in that same place "hundreds" of times. I took a picture of him and promised to e-mail the result to him. This was it:- 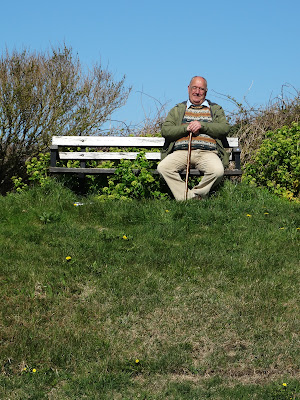 After a little snack and a pot of tea in the RSPB (Royal Society for the Protection of Birds) cafe at South Stack we viewed South Stack lighthouse with nearby nesting terns and guillemots perched precariously on sea cliff ledges. 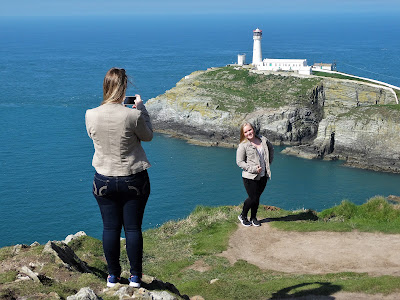 Then we were back in the car tootling down to Rhosneigr and Aberffraw. We tarried in both seaside villages and then we drove down a single track lane to see an amazing historical little church that sits on an island in a rocky bay. It's called St Cwyfan's Church. Fortunately, the tide was out so we were able to walk across the rocky causeway to spend a little time in that marvellous place. At high tide the island is always surrounded by sea-waves. I reckon that the church sits on what was once a significant pagan site in pre-Christian times. 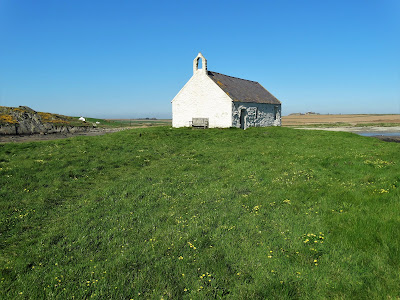 In the last thirty hours we have done and seen so much. I could easily have made this post as long as your arm. One of the highlights would have been how I avoided a collision with a speeding farmer's 4x4 pick up truck by taking swift avoidance action - swinging in to the gateway of a field and hearing the ominous crunching of rocks beneath my faithful Clint. The farmer paused briefly and then sped off, not stopping to see how shaken we were or whether or not any damage had been caused. The whole incident lasted two seconds. I am sure that if I hadn't swung my steering wheel there would have been a head-on collision with airbags deployed. These one track Welsh lanes with tall hedgerows can be treacherous so I drive along them like Reginald Molehusband. Steady as she goes.
- April 08, 2017