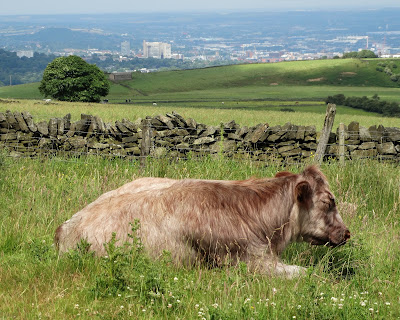 On Thursday evening, at the end of a grey and rather wet day, I was sitting in "Clint" reading a book. I was parked up adjacent to a gateway on Fulwood Lane, not far from Brown Hills Farm. After a couple of pages I noticed a cow strolling over to the gate with two brown calves. All three were observing me with that quiet, becalmed nature that is characteristic of most cattle.

Compared with human beings they appear so peaceful, at ease with their outdoor life, content to munch grass and let the hours pass by. As the three beasts observed me, I wound down my window and mooed at them. Though I say it myself, my impersonation of a lowing cow is so authentic that if I were following you down the road you would turn expecting a Guernsey or a Friesan, not a crazy animal impersonator.. However, the three creatures at the gateway seemed deeply unimpressed.

More cows wandered over to the gateway till there were around twenty checking me out with their big brown eyes.. They pushed against each other to get a better view of the human in the silver car. It may have been the most exciting event of their day and briefly I felt like a TV celebrity enoying the adulation of his adoring fans.

I tell you, it isn't easy to concentrate on a nineteenth century novel when you have a small herd of cattle watching you from six feet away but after half an hour they began to drift off towards the other side of the field. The show was over and more grass munching was required before nightfall.

I snapped the top picture of the resting cow on the edge of Houndkirk Moor last week. She is just relaxing there in the sunshine. Beyond her, down in the valley, you can see the western side of the city of Sheffield where I have lived since 1978.
- July 01, 2017