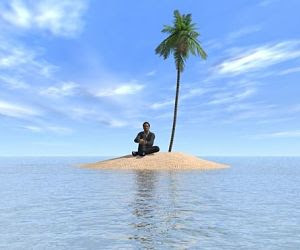 Last weekend we were at a big family party. It was an afternoon event out in Lincolnshire and it was held in a rambling old vicarage owned by one of Shirley's aunties. What a marvellous place - so spacious! And what a marvellous spread of food her auntie provided - including huge joints of tender ham and beef, melt-in-the-mouth Lincolnshire new potatoes, dressed salads and homemade lasagne.

She is in her early seventies and divorced. She has two sons. One of them got married and moved away but the other one - now around forty five years old - still lives at home with his mother. He never moved out and still works in association with his father who is a major landowner in the area, overseeing several arable farms. Hence the big house.

With the son, it is as if the train pulled out of the station but he was left at the platform. You could say that life passed him by, This may be linked to his parents' separation but whatever the reason he sleeps in the same room he slept in when he was a schoolboy.

It is a phenomenon I have noticed before - grown up children still living in the family home. I  can only imagine the tensions that this must sometimes cause. The son or daughter frustrated by what they may see as their failure to catch the train and the parents being reminded on a daily basis that their chick failed to fly the nest. It's not what you expect when you bring a child into the world. You must sometimes wonder - what did we do wrong?

Of course nowadays an increasing number of grown-up children continue to live in the family home simply because of financial pressures but this was never the case with Shirley's cousin. He had the economic power to move away and make a new life. I don't know if he ever had a girlfriend or indeed whether or not he is a gay man in denial. But looking in from the outside I find the situation rather sad.

Not only is he stranded in the vicarage but the years are ticking by and the die seems well and truly cast. It is unlikely that anything will change until his mother departs this earth and even then he'll probably continue to rattle around in that big country house surrounded by the ghosts of old times and lost opportunities.
- July 18, 2017