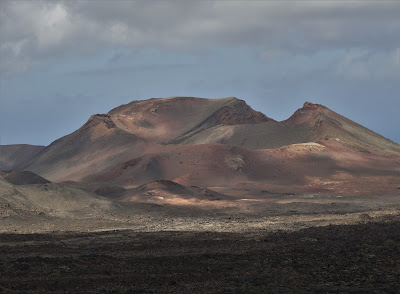 Zzzzzz...! If you are getting bored with my posts from Lanzarote, please rest assured that we are only here for a week and now we are getting to the end of this holiday time. We will soon be home and normal blogging activity will be resumed shortly. Please bear with me.

In the mid eighteenth century, Lanzarote witnessed major volcanic activity to the south west of the island. New mountains sprang up and a vast gooey lava field edged its way into the sea. Millions of tons of volcanic ash were spewed out and the air was thick with steam and toxic clouds. Today that area of the island is now the Timanfaya National Park - its establishment partly inspired by Cesar Manrique. 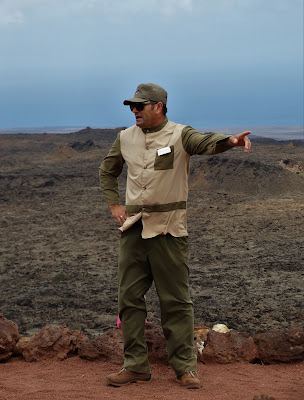 You pay ten euros per person at the park entrance and then you drive up to the visitors' centre. There you transfer to a coach and the bus driver takes you along a twisting route that curls through the heart of a volcanic landscape that seems as if it was created just yesterday. The lava field in the valley is like a moonscape of black, jagged rocks and creamy lava flows with holes and crevices. Unfit for farming, plants have found it difficult to gain a foothold over the past two hundred and fifty years. The last significant eruption was in 1820. In geological terms this is but a moment in time. 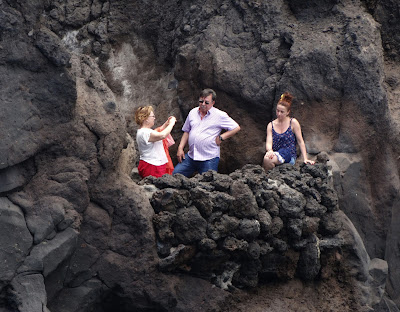 It was as folk are wont to say - an awesome spectacle.

We drove on to Playa Blanca and saw the lighthouse at Punta Pechiguero. Playa Blanca is very different from when Coppa's Girl (blog visitor) used to stay there years ago. It has become a sprawl of holiday villas and apartments reaching down to the shoreline. They are all white and look the same - little boxes made of ticky tacky. But the sun shines down and that's the main thing that many western European holidaymakers want. 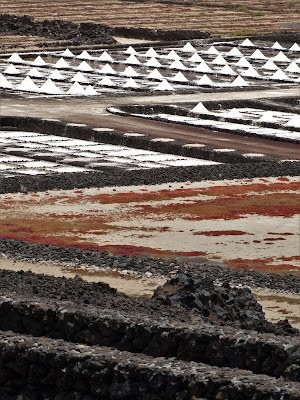 Onwards to the salt flats and to the rugged coast at Los Hervideros before arriving in the tiny seaside village of  El Golfo where we ate lunch. I asked for grilled sardines and they brought me a pile of them - maybe fifty of the little blighters. A dozen would have been plenty. The restaurant cat enjoyed four or five of them under our table. I couldn't manage more than twenty. Shirley is a rather fussy eater and wouldn't even try one of the little fishes which you eat whole - eyes, bones, everything. We also had a  mixed salad and Canary potatoes with mojo sauces. The bill was not humble. 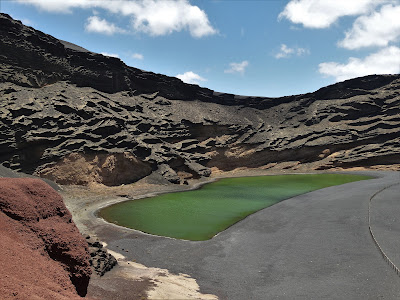 We only had our hire car for two days but it allowed us to achieve a much better notion of Lanzarote's constituent parts and the rugged sunlit beauty that  illuminated Cesar Manrique's dreams. There is more to this island that might at first be presumed. 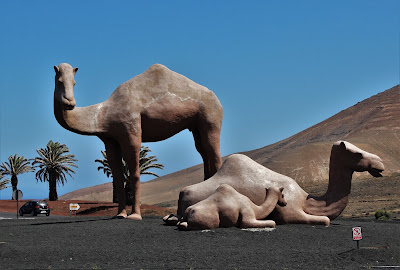