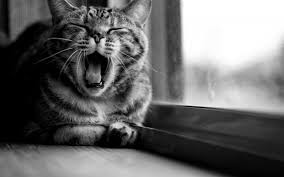 Yesterday I felt quite bored. It was a nothing kind of day and I didn't really feel like doing anything - well nothing special. It was rather grey and chilly outside which is exactly how I felt on the inside.

Shirley left for work at 8am while I lay in bed listening to "Today" on Radio 4. They say that folk are either larks or owls and I am most definitely the latter. Generally I stay up late and that's why I do not feel a single iota of guilt about rising at nine o' clock. I had enough of  early starts in my years as a teacher. I would have much preferred it if the school day had started at 10am and finished at six. It would have suited my natural body clock much better.

Anyway, I had breakfast. Toast with peanut butter and strawberry jam with a banana and a pint of tea. I surfed the internet and emptied the dishwasher before filling it again. Then I went back upstairs to perform my usual tedious daily ablutions. It's like Groundhog Day. Shampoo, mango scented shower gel, shaving foam and razor. It never changes.

Then get dressed and make the bed, Back downstairs. A bit more internet surfing. Another scam call from an Indian call centre. I say, "Why is your number withheld?"  Then they abort the call. Christ! I am so sick of those people and it's all because of our phone and internet provider - Talk Talk. Their database was hacked into two years ago and these extremely irritating calls remain the unpleasant legacy.

I stepped into our back garden to feed the birds and later I  noticed a single grey squirrel hopping about. I wondered if he might be partial to our growing vegetables - peas and beans and courgettes. Over the past twenty eight years there have been very few squirrel sightings in our garden for which I am quite thankful.
Lunch was a chicken sandwich and a mug of coffee. I caught the tail end of " Bargain Hunt" on the television. One pair made £190 profit on a Victorian servants' bell box.

I just didn't feel like doing much yesterday though there were things I could have done and perhaps should have done. I felt bored and lazy but at two o'clock - just to get out of the house - I jumped in the car and headed out to Stanage where I sat in a favourite lay-by  and began to read "The Underground Railroad" by Colson Whitehead.

I had a little walk through the bracken to Sheepwash Bank and then back along the familiar lane to Clint where I read some more before heading home. Here I watched "The Chase" quiz show on TV during which Shirley got home from work. Then I made our evening meal - new potatoes, cold chicken and hot gravy, grilled field mushrooms and broccoli.

The boredom persisted. I had nothing planned for Monday night. I watched Prince William and Prince Harry in an ITV documentary about their mother, Princess Diana and I remembered that weird day back in 1997  when  the whole country seemed overwhelmed with grief as her funeral cortege headed from London to Althorp in Northamptonshire.

Yes. July 24th 2017 was for me a very forgettable day. Boring and bored. I guess we all have days like this once in a while. The brightest note of the day was the excellent news that Jennifer in Florence, South Carolina has landed a new job.
- July 25, 2017