Haxey is a large village in the middle of The Isle of Axholme in Lincolnshire. Clint whisked me over there yesterday morning to meet up with my old friend Tony for a long country walk. Tony lives in my homeland - The East Riding of Yorkshire.

As it happens, The Isle of Axholme is where my lovely wife grew up. It isn't really an island but prior to the seventeenth century it was a very watery world bounded by rivers with a few villages situated on higher ground. Villages like Epworth, Belton, Crowle, High Burnham and Haxey. By the way if there are any Methodists reading this, The Isle of Axholme was the cradle of your religion. John and Charles Wesley were born and raised in Epworth. 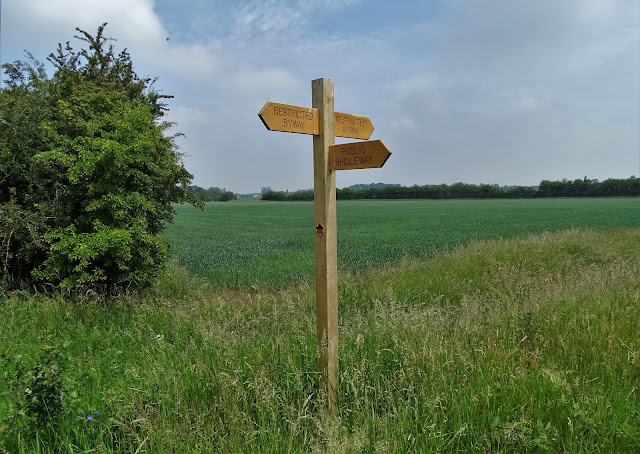 With boots on, we left the car park attached to St Nicholas's Church in Haxey and set off along an old railway bed to Epworth. We ate sandwiches in the delightful grounds of the main methodist church and considered the course of Britain's response to the pandemic. We agreed that our current prime minister has done nothing to dispel the conclusion that he is an egotistical buffoon. Someone who wanted the spotlight but is weak on detail and judgement. During these critical times, we needed a better-informed, wiser political leader. Plenty of glaring and indeed fatal mistakes have been made since the British lockdown began.
Anyway, after lunch we wandered west from Epworth to discover a new word - "turbary". It is contained in the names Epworth Turbary and Haxey Turbary. These locations were just two miles apart. One dictionary says this "turbary - the ground where turf or peat may be dug especially for fuel". The word relates to ancient land rights that were largely ignored when The Isle of Axholme was tamed by Dutch drainage experts.three hundred and fifty years ago.

Rising ground brought us through a field of maize seedlings to Westwoodside. You could see for miles. Then we passed the field where the famous "Haxey Hood" is played out each January - with teams of men from different pubs battling to bring the "hood" home. To learn more go here.


It was good to meet up with Tony. He walks at the same pace as me - in more ways than one. Weather permitting we plan to reconvene for another walk next week. However, as I sit here typing out this account, my right foot is giving me so much gyp that I had to limp downstairs this morning. Funny that. When the walk finished I felt no discomfort whatsoever. Hope it's back to normal by next week. After all, Clint loves to spend quality downtime with Tony's female car - Elsie!
- June 18, 2020