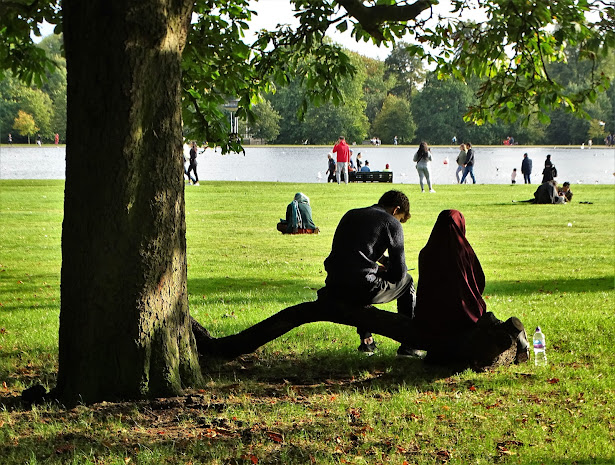 By The Round Pond, Kensington Gardens
Down to London on Saturday morning then back today. We had a lovely time. We visited our Ian's flat in Shepherd's Bush for the first time. He was so pleased to have us there and the flat was most splendid. Mind you, at half a million pounds it needs to be.
Lovely Sarah was there too. They have been together for a full year now. It seems serious. Funny word to use that isn't it? "Serious" - to describe a relationship that is joyful and loving with much laughter and touch.  In finding each other, they feel less alone in the world and so in a sense less serious! More light-hearted.
We had lunch in "The Ship Inn" at Hammersmith by The River Thames and then we walked back to Ian's little flat before heading up to Camden to see one of his old school friends in a two man play called "Fritz and Matlock". Though the audience was small, the drama was excellent and afterwards we met the TV actor Mike Stevenson who plays a paramedic called Ian Dean in the long-running BBC medical drama - "Casualty". Co-incidentally, he also hails from Sheffield. 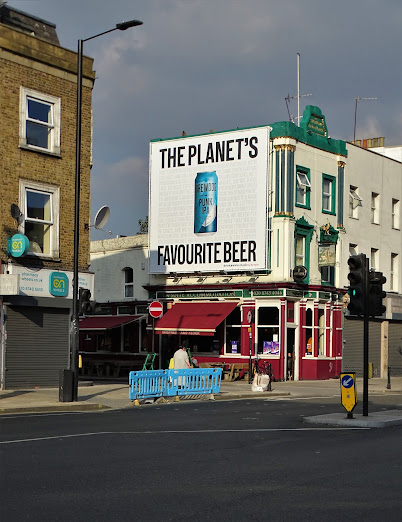 Pub on Goldhawk Road, Shepherd's Bush
On Sunday I drilled holes in Ian's walls in order to put up four framed pictures and a floating shelf. This mission was completed successfully without fuss. Then we went off to the nearby "Westfield" shopping centre - the biggest in Europe - where Shirley bought a new coat and we looked at some other items but didn't buy.
By now it was late  - a beautiful autumnal afternoon. We headed over to Kensington Gardens in Ian's electric car - a black and yellow Mini Cooper. After finding a free car parking space we wandered through Kensington Gardens and Hyde Park right over to The Albert Memorial. 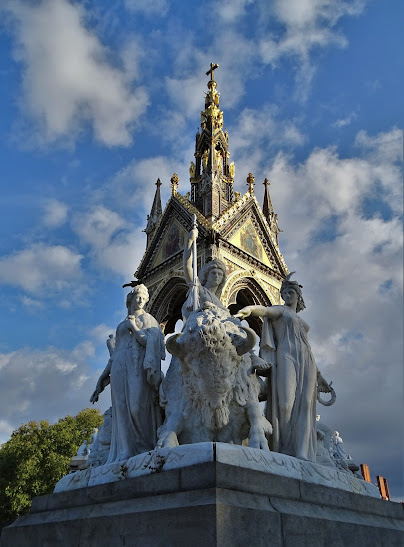 This stone carving represents "America" and forms
a corner of The Albert Memorial
It struck me that this gaudy rocket ship of a memorial with its stone carvings, mosaics and gilding was arguably the very pinnacle of The British Empire. A monument to a man but also a statement of imperial self-confidence, achievement and pride. Queen Victoria's German consort died of typhoid in 1861 but his memorial was not fully completed until 1876. 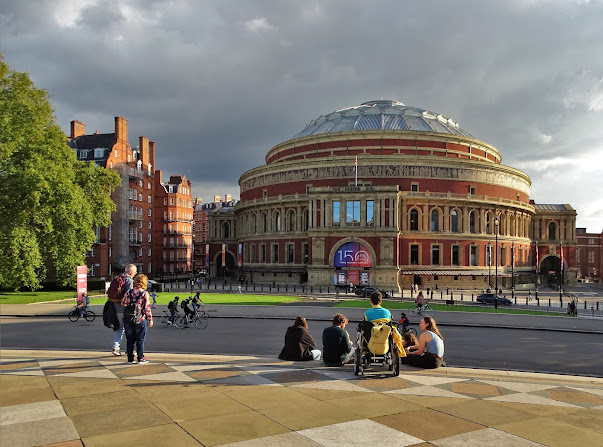 The Royal Albert Hall opposite The Albert Memorial
Back at the flat Ian prepared a delicious vegan stir fry and I made  an apple crumble for dessert using  windfall apples from our own garden.
After a lazy Monday morning we headed back  Up North, stopping briefly at the Northampton motorway services in order to inspect the lavatorial facilities and purchase refreshments kindly prepared by Ronald McDonald. Please don't tell Ian... 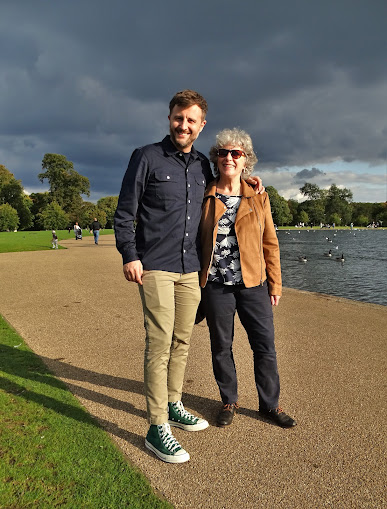