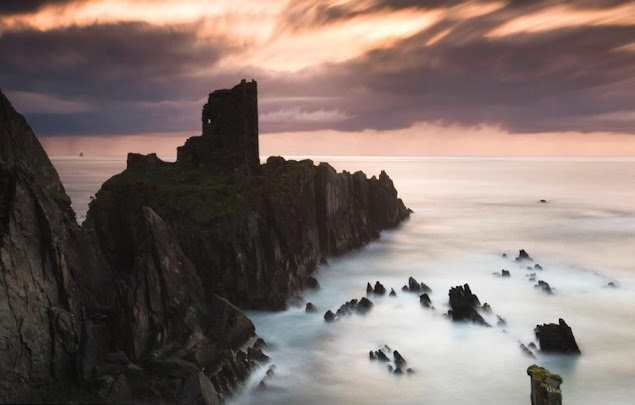 In the summer of 1974, I was twenty years old. A lot of things happened that summer. I covered hundreds of miles through hitchhiking. I made some money working at a  Butlin's holiday camp and later on at a raspberry farm that overlooked Beauly Firth near Inverness in Scotland. I attended The Cambridge Folk Festival and I also visited Ireland for the first time, carrying everything I needed in a weighty rucksack - tent, sleeping bag, camping stove, extra clothes, toiletries, everything.

On June 12th in Dublin, I bought a little notebook which I used as a journal for the rest of that summer. I was pretty good at keeping up with the days. Fortunately, I kept that notebook and rediscovered it a few weeks ago. It is the diary of another me - a sapling. A young man in search of things - for understanding, wisdom, happiness, new experiences and of course love.

By June 29th I was on Cape Clear Island off the coast of County Cork. This is what I wrote that day:-

There is a castle on an island promontory which looks out from  the very edge of Europe. Years of gales and human neglect have caused its walls to crumble, so that instead of towering nobly above the mother rock, it has, rather like a chameleon, taken on an appearance that blends in with the cliffs and the rocky islets that cluster around it.

Ah, but in spite of this decline, the ancient fortress has not yet surrendered its history which the jealous rocks watched  being formed. Still, still midst the tenacious rock plants in the crevices, standing there without motion you can sense times that have gone... A pirate called O'Driscoll, on those decaying stone stairs, his footsteps padding, a tankard of Spanish wine in his right fist. He stops on the parapet above that frothing sea, hacking his throat clear. He looks out through the moonless night to the horizon and his gaze stumbles upon distant torchlight upon one of his wooden ships returning from the Americas.

On that very same horizon two centuries later it's the blue and white spinnaker of an elegant French yacht which reveals itself to the island and the now crumbling castle. Oh that that man of the sea with lice burrowing in his scalp and food stains on his raggedy beard could see his proud fortress as it is today.

Perhaps standing with me in the soft summer grasses on the clifftop, his hard shell  would crack and at last words would rise from his hidden heart: "I didn't know. I didn't know" and we would walk along the island's rim watching seabirds gliding to their ledges and O'Driscoll would survey it all then lean over the edge searching for his reflection in the waves below and having failed to find it he would renounce his days of power and plunder and see like me a world of waiting and wondering - not rushing to pursue foolish dreams.

Seagulls, rock plants, yachts, cliff faces, a distant lighthouse - I missed it all loading my camera. 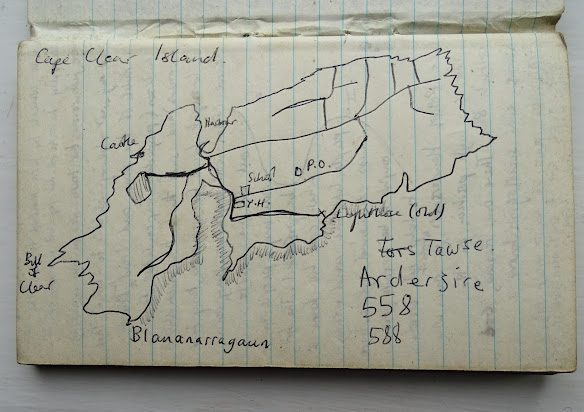