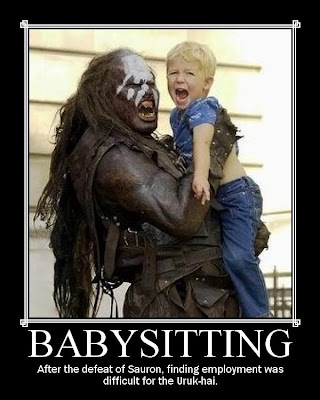 Between the ages of sixteen and eighteen, I earned quite a lot of pocket money through babysitting. Mostly I went to two homes on nearby Barley Gate - a small private housing estate that had been built on fields adjacent to our house in the mid-sixties.
In one of the homes I went to, there was a little boy called Neil. Often, after his parents had driven off, he'd get up and tiptoe downstairs to get me to read him a story. He'd sit on my knee and when the story was done, I'd take him back upstairs and tuck him in. Twenty years later, I met him again in a pub in Beverley. He came over and hugged me - though at first I didn't recognise him. He was now a strapping, handsome soldier - as tall as me and so obviously delighted to reconnect with a character he remembered warmly from his happy childhood.
At the other home I went to, there were two little girls. One was called Dawn but I can't remember the younger girl's name. Their mother, Pat, always made me up a supper tray which I'd look forward to after a spell of A level homework. The little girls nearly always slept soundly. I would look in on them occasionally to check that they were okay. Once Dawn woke up - she had a bad cold - and I brought her into the warm sitting room where I made up a story about fairies in the garden before carrying her back to her bed.
When we moved from the Crookes region of Sheffield here to Banner Cross, our Frances was only ten months old. A schoolboy called Jamie - who was seventeen at the time - called round every Friday to collect payment for the week's milk deliveries. He was an affable young man and after a few weeks we decided to ask him if he'd like to make a bit more pocket money by babysitting for us. He jumped at the chance and so for a few months we had the services of a trustworthy babysitter.
Jamie is now in his late thirties and a manager at the nearby suburban restaurant where Frances worked as a silver service waitress from the age of fourteen. Jamie kindly offered her a few shifts through the Christmas period. On her first night back, he announced to some of the new waitresses that this was Frances and that he used to babysit for her when she was literally a baby. One of the new girls said something like this - "You mean her parents trusted you to babysit? A teenage lad looking after a little girl?" The essence of her remark clearly being that young men cannot be trusted when it comes to child-minding for they are all potential perverts or paedophiles.
Living across the road from us now, there's a lovely little family, including two delightful small girls called Sophie and Helen. I know them far better than Shirley does simply because - since my "retirement" - I've seen a lot more of them. The dad, Chris, has a job which often takes him out of the country so his wife frequently has to operate as if she's heading a one parent family. I talked it over with Shirley and offered our babysitting services. Interestingly, they have made the automatic assumption that it will be Shirley doing the babysitting and not me. Between the lines, I can sniff that same widespread notion that you just cannot trust men any more when it come to babysitting.
It is both sad and maddening. Jamie and I are like the vast majority of men everywhere. The idea of sexual contact with children is repulsive to us. Our instinct to protect children and brighten their days is as strong in us as it is in the majority of women. Why should we as "normal" right-minded men have to suffer unspoken suspicions nurtured by the gutter press and inflammatory television programmes? Small children have the right to learn that daddy is not the only good guy and that nearly every man they encounter will mean them no harm whatsoever.
- December 22, 2010