The first cooks I ever met were Nellie Brocklebank and Irene Buckley. They wore white nylon housecoats and were both meaty, kind-natured East Yorkshire women. They were our dinner ladies. Were there ever breakfast ladies or supper ladies? They stood at the hatch into our village primary school hall and served up their wholesome dishes of the day. Day after day.
There was no choice and we didn't expect it. As at home, you ate what you were given without complaint. None of that foreign muck either. These were the days before pizza, before curry, before stir fries, french fries or even spaghetti bolognese. To drink? No fizzy pop, just a jug of water and plastic beakers. Meat and potato pie, boiled cabbage, liver and onions, peas, fish pie, mashed potato, Irish stew, boiled carrots, rice pudding with rosehip syrup, treacle sponge with custard, chocolate sponge with chocolate sauce, sago pudding, semolina, flapjack, ginger sponge - those are the only regular items I can recall but there must have been others. It's so long ago.
On television the only TV cook I remember from my childhood was the snobbish, dictatorial and most unlovable Fanny Craddock who, with her hen-pecked husband Johnnie, gave lessons in basic cooking techniques as if to a large class of twelve year olds. In spite of her first name, Fanny made sure that food was never "sexy". Slagging off British cuisine, she once said, "Even the good old Yorkshire pudding comes from Burgundy," which is of course an outrageous fib! It was first created in a cave at Brimham Rocks.
Nowadays there are so many familiar TV cooks with wealthy lifestyles and recipe books shouting at us from bookshop windows. Most of them never wear aprons when they cook which seems most unhygienic to me. They make the production of meals seem like some kind of religion as they seek levels of perfection that ordinary mortals will never attain. Their voices hushed. Their hair coiffured. They have climbed aboard the big cookery bandwagon while a majority of the watching TV public munch on ready meals, pizzas and beans on toast.
There's Gordon Ramsey with his cartoonish tantrums, annoyingly posh Nigella Lawson with her nodding head, Jamie Oliver with his cockney cheeky boy humour, James Martin with his playboy lifestyle and pseudo-Yorkshire common sense, Rick Stein with his expensive restaurant and fresh seafood and The Hairy Bikers with their wholemeal working class authenticity. These people have become media stars simply for cooking plates of food. Meanwhile, in numerous parts of the world from Mali to Bangladesh and from Madagascar to Mongolia, there are many, many people who don't give a damn about salad dressing or the singeing of meringue with a blow torch - all they want is food in their bellies to sustain them. The contrast between the two worlds remains as obscene as ever. 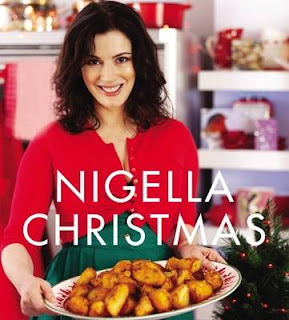 Above - the annoying Nigella Lawson's Christmas recipe book.
Below - starvation in Africa
How can we allow such stark contrasts to continue? 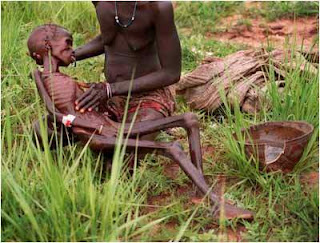