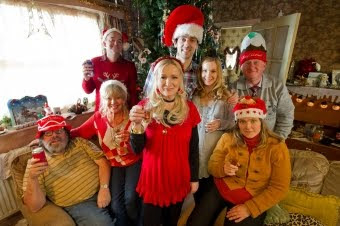 The Royle Family Xmas 2010
No more gathering round a burning Yule log on Christmas night. In most Yorkshire homes, families crash out on their DFS sofas, bloated to bursting point with roast turkey, pigs in blankets, parsnips, chestnut stuffing, cranberry sauce, brussel sprouts and Christmas pudding. The television is switched on and conversation dwindles.
On our new flatscreen Samsung LED TV, we watched two comedy shows - "The Royle Family" followed by "Come Fly With Me" devised by David Walliams and Matt Lucas of "Little Britain" fame.
All of us laughed along with "The Royle Family" which always seems to hit the spot. I still think it's quite brilliant how the writers of this show wring out humour from a most unlikely circumstance - a working class family just sitting around in their living room dominated by Jim, a lazy, farting but ultimately kind-hearted Homer Simpson type figure. In some hands, the show might have simply caricatured and mocked such an unexceptional family but Caroline Aherne and Craig Cash endow their characters with an underlying decency that wins our affection alongside our tears of laughter.
This Christmas special focused on Joe Carroll, the Royles' next door neighbour, and his continuing all-consuming grief for the loss of his wife Mary whose ashes he brings to the party in an urn. At one point Joe, played by Hull-born actor Peter Martin, sings - rather beautifully "An Irish Lullaby" in memory of his beloved Mary. Everyone listens and when Joe has finished, Jim says simply, "Nice that Joe...Nice that".
Of course later Jim manages to knock the urn off the table, scattering Mary's precious ashes all over the carpet but have no fear - Barbara's got a new Dyson vacuum cleaner to save the day.
In contrast, "Come Fly With Me" with its brilliant costumery and make-up was a huge let-down. It took the format of the documentary series "Airport" and attempted to create a spoof version. Frankly, it was cringeworthy and all of my family had the sense that Walliams and Lucas were simply proving that their once popular brand of off-the-wall humour had pretty much reached the end of its tether. Some of the characters they created were offensive racial stereotypes and sadly the large financial investment made in this show's visual effects was not matched by the writing. We were so unmoved by it that we had to switch over with ten minutes to go. Its failure was in stark contrast to the success of "The Royle Family".
On Boxing Day Night, Shirley and I watched the Football League Show with highlights of the match we'd seen at Bramall Lane earlier in the day. It was a game filled with high drama and a last minute decider scored by Jimmy Bullard to leave us cheering the final score:- Sheffield United 2 Hull City 3! What a brilliant late Christmas present and what a great first football match for Ian's lovely girlfriend Ruby to experience. We were on the back row at the visitors' end.... "Bramall Lane is falling down, falling down, falling down. Bramall Lane is falling down - it's a s---hole!" and "They're ere they're there they're every f---ing where. Empty seats! Empty seats!" Pure poetry. 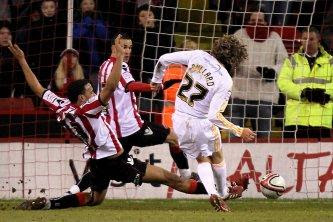