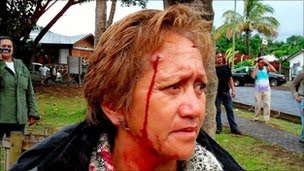 Last week on Easter Island
The recent history of Easter Island has been tragic for its indigenous inhabitants. At the start of the twentieth century, there were only around four hundred islanders left and they were treated like some kind of dispensable lower caste by sheep farmers, whalers, and a Peruvian mining company that herded up boat loads of islanders against their will. With imperial ambitions, Chile took control of the island even though the majority of islanders either had no idea what such a union might involve or were vehemently against it from the outset.
A year ago, I talked with a native of Rapa Nui (The Polynesian name for Easter Island) down by the little harbour at Hanga Piko. He could trace his ancestry way back in time and was passionate about his island's unique heritage and its future. He'd had a good day's fishing from his little motor boat and had already enjoyed a few beers in celebration. I bought him a couple more. He told me about the invaders from Chile who were quietly and cunningly buying up land, building new homes, setting up little businesses. My new friend saw it as insidious and though he loved to see visitors from foreign lands, he was suspicious of Chile, its people and its motives. 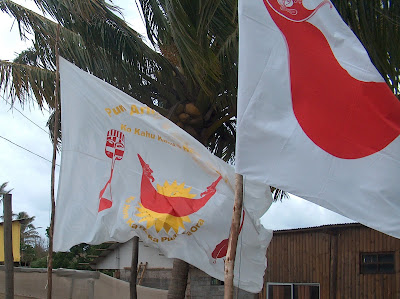 The flag of Rapa Nui with its red reimero image
I was already aware of discord. Over some island homes, the Rapa Nui flag flew and in the main street of Hanga Roa, there was a permanent display calling for independence from Chile. Ironically, back in Chile itself there are many visual reference to Easter Island. At the airport in Santiago, big fibreglass moai statues stand sentinel in the duty free souvenir shop and on the wide Alameda in the centre of the city there is even a fake moai made from concrete. Chileans are proud of their little Pacific island territory.

This past week, there has been unrest in paradise as the Chilean authorities seek to force a small group of Rapa Nui militants from their ongoing occupation of a building in the main street that coincidentally I passed by several times. A representative of the Save Rapa Nui group described the behaviour of Chilean security forces: "They injured at least 23 of our brothers and sisters, three of them seriously. One was shot in the eye with a buckshot pellet from just a metre away."

Maka Atan, a Rapa Nui lawyer, told the Associated Press that police had been "shooting to kill". He said he was shot in the back by pellets. "It seems like this is going to end with them killing the Rapa Nui."

So the tragedy of Easter Island continues. Once it was home to the moai makers. Far from anywhere else they created a new, unique culture and probably had no contact with the outside world for a thousand years. There were trees and seabirds and the ocean was bountiful. They lived, by all accounts, in happy obscurity until all the trees were gone and the population had grown too large. Then internecine conflicts occurred that ended with the toppling of the moai so that when the first European visitors arrived - Roggeveen (1722) and Captain Cook (1774), the old culture was already becoming a distant memory.

The descendants of those old Rapa Nui people remain. They have their own unique language, songs and folk tales even though their children are taught in Spanish. Before World War One, the native inhabitants were driven off their lands to the east, south and north of the island and made to live on the west coast so that vast flocks of sheep could be grazed without interference. Stealing sheep resulted in death for several Easter islanders though these killings tended to go unrecorded. The Chilean takeover has been - and continues to be - less obviously uncaring, disrespectful and downright cruel but its effects are just as devastating. Sadly the history of this planet is littered with similar tragic tales of how economic might rides roughshod over the defenceless. 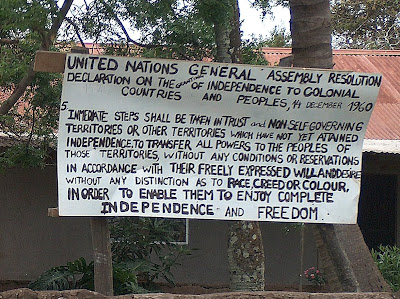 N.B. Connection to the website may be more problematic than usual owing to a small airborne invasion by Chilean security men late on Saturday Dec 4th to quell "the trouble"!