I have ranted about Londoncentricity before. Perhaps it's the same in all countries - capitals reaping attention while the provinces are rather sidelined by their national media. From Bujumbura in Burundi to Papeete in Tahiti, no doubt the news focus remains biased towards their capital city which is normally also the nation's metropolis.
Though South Yorkshire suffered a massive deluge of snow at the beginning of this month, we avoided the snow chaos that has swept across England's southern underbelly in the last couple of days. The roads have been clear here and though the temperature has been regularly well below freezing, commerce has not been adversely affected.
Yet if you listened to TV newscasters and TV weather forecasters, you would think that their south eastern snow chaos was nationwide. People are trapped in motorway traffic jams. Shopping centres have shut their doors. Schools have closed . But hey, not here in South Yorkshire or Nottinghamshire or Leicestershire or Lincolnshire or Warwickshire or Derbyshire. They warn us not to venture out in our cars unless absolutely necessary because of drifting snow and icy, impassable roads. Where?
Well, in spite of the dire warnings of disaster, I ventured out this morning. I drove at 80mph on charcoal-coloured tarmac down the M1 to Junction 27 where I turned off to park up close to Moorgreen Reservoir in Nottinghamshire. Then I went for a walk in an area that the writer D.H.Lawrence once referred to as "The Country of My Heart". Sure enough, the surface of the reservoir was frozen solid but the paths I walked were virtually snowfree - just a light dusting, as if from a sugar shaker.
After my invigorating five mile walk, I carried on along the M42 to Birmingham. It was only when I was entering the suburb of Selly Oak to the south of the city that I encountered some winter chaos. There had been a fairly heavy snowfall. Traffic was crawling along and in five hundred yards, I lost twenty minutes before turning into Dawlish Road and parking up at the terraced house rented by our Frances and her friend Charlotte during their last year at university. I was bringing them home for Christmas.
Once out of Selly Oak, I again zoomed along - A38 through the very heart of Birmingham, M6 past Fort Dunlop until we reached the M42 North which later links back to the M1. Traffic was lighter than usual and so the journey time was shorter on a day that our nation's news people and meteorologists seemed to have cancelled out before they struggled back to their snowbound flats in Fulham, their mansions in Maidenhead and their studios in Sidcup.
And yet...perhaps my best memory of today was viewing Haggs Farm from a distance. This was the childhood home of Jessie Chambers, Lawrence's first sweetheart and the basis for Miriam's farm in the novel "Sons and Lovers"... 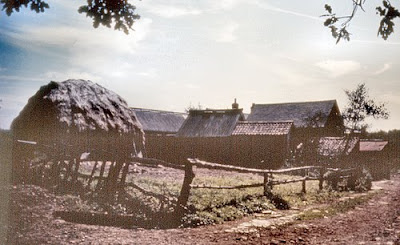