In most homes, where people of a certain age reside, it would be possible for forensic teams to uncover secret caches of photo negatives and long forgotten colour slides. The Pudding household is no exception. Such items belong to older imaging technology. With computers and digital photography now widely used, the old stuff is often and quite understandably overlooked. After all, what can you do with it?
Well I got a toy this Christmas - from my younger brother - Simon. It's a "5MP Slide and Film Scanner" that connects to our computer via a USB port. It's really quite simple to use. So far I've only been scanning old colour slides. You click your mouse and the image is saved as a jpeg in your "My Pictures" folder. It's really very easy. Here's the little scanner I've been using:- 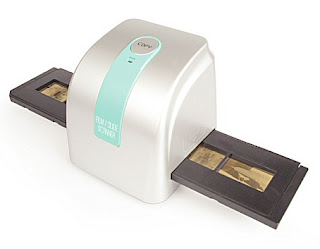 And here's a scan derived from a colour slide I created at the Isle of Wight Festival in 1970 on the morning after that amazing musical festival had finished. I took it with a camera I had just found hanging in the men's rather primitive open air lavatories. It was a Pentax Spotmatic and I had absolutely no idea how to use it. I didn't even know if there was a film in the camera. I just snapped. A light drizzle was falling as the couple under the polythene got ready to leave the festival site:- 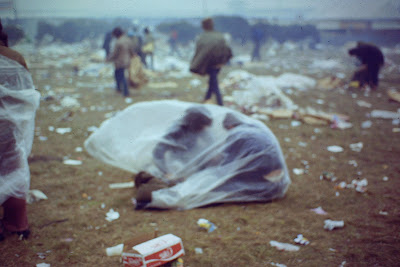 And this is me at nineteen years old way back in 1973. I'm half standing in the dugout canoe that my friend Majito - who was also nineteen - had created with his own hands. It was on the island of Rotuma- halfway between what were then the Ellice Islands and Fiji. I believe the Ellice Islands were renamed Tuvalu after independence. Not too proud of that hairstyle. I seem to recall that my laundry girl, Maria, created it with a pair of kitchen scissors and a lot of laughter:- 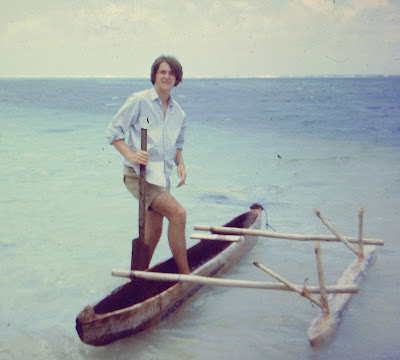 I swear I'm not being sponsored by Maplin Electrics Ltd but if you want to give new life to old slides and negatives, I suggest you treat yourself to a film and slide scanner. Hopefully, you'll rediscover pictures that are not even half as embarrassing as that picture of me and the outrigger canoe!
- December 30, 2010