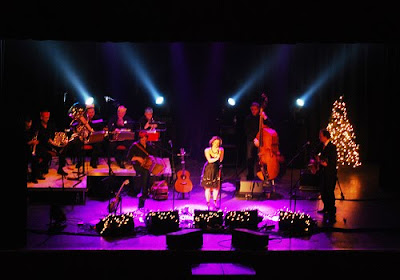 It's a good long while since Shirley and I went to a live concert together but last night we did just that. Venue - Sheffield's marvellous City Hall. Artist - Yorkshire's own Kate Rusby with her talented little band and brass section. She was born in Sheffield so for her a concert here is very much like coming home. With tickets priced at £22.50, there were very few empty seats.
The show had a decidedly Christmassy flavour with Kate having specially resurrected some of the "Sheffield carols" that were stifled by churches in Victorian times for they were thought to be too raucous, lively and insufficiently dull for mid-nineteenth century congregations.. Instead they are now usually only sung in a few pubs to the north and north west of the city - in Dungworth, Grenoside, High Bradfield and the like.
Of all the carols she included in her split two hour long set, only "O Little Town of Bethlehem" retained its traditional tune.
Back in June, Kate married her guitarist, Damien O'Kane from Northern Ireland. They had already produced a little daughter together. She allowed Damien his special time in the spotlight so that he could give us a reworked version of the traditional Irish folk song, "Summer Hill". Damien has a deep, rich way of singing and is so comfortable with his guitar. I would like to have heard more from him but the audience had come to see his wife.
Kate Rusby herself has a lovely, distinctive singing voice. Between the songs, she establishes an intimate self-deprecating rapport with her audience, She smiles a lot and in spite of her years at the forefront of English folk music, she comes across as being someone who still can't believe where she is - on a stage with hundreds of people looking at her.
I would like to say that it was a brilliant concert but to tell you the truth, I came away feeling a little disappointed. The music generally had no "guts". It was all too pretty and in terms of musicianship - far too perfect. There were too many Christmas songs for my liking. I wanted to hear songs that were not simply easy on the ear but songs that would make me laugh, bring tears to my eyes or cause me to consider particular aspects of my own life. I just didn't get that sense of "connection" amid all the niceness and the pleasant banter between the various planned items on the playlist. I'd love to hear her reworking songs by Sandy Denny or Judy Collins.
I suppose it depends on what you want from music. I'm afraid I need a bit more than Kate Rusby provided but for some of you out in Blogland she might be just your cup of Yorkshire tea! 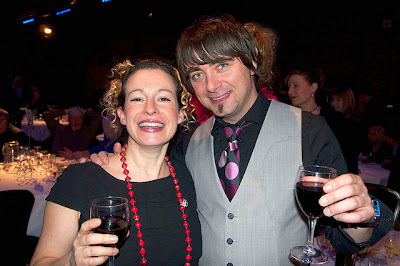