Yesterday I was on safari once again - visiting another corner of this green and pleasant land. An hour's drive brought me to the hamlet of Budby in Nottinghamshire. Then it was boots on and off into the wilderness. I had intended to get there by ten o'clock because the weather forecast promised a lovely sunny morning with cloud coming over around 1pm but I didn't reach Budby till eleven.

Ahead of me were the trees - lots of them - for I was walking through one of the best remaining sections of Sherwood Forest. This deciduous forest once covered a huge swathe of central England and what we see today are the mere vestiges of what once was. According to legend, it was in this area that Robin Hood and his merry men lurked, waiting to rob from the rich and give to the poor. It is said that Robin married Maid Marian at St Mary's Church in the village of Edwinstowe which is where I was heading. 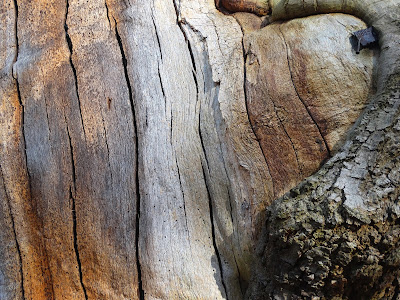 With all the tracks and paths that pass through the forest, I soon got lost, heading south west instead of south east. I caught up with a fat man in a long brown smock with a rope tied around his middle. His coarse woollen smock had a hood or cowl and the hair on the  top of his head had been shaven off in the manner of a medieval monk. "Good morrow stranger," said the chubby fellow. "Whither  go'est thou?"

I explained to him that I was lost and looking for The Major Oak. He gave me directions in a form of English that seemed almost Shakespearean and when I showed him my digital camera he appeared genuinely astonished. "What manner of thing is this sire? Tis the devil's own device!" He refused to have his picture taken and looked rather sheepish when our paths separated at The Centre Tree. 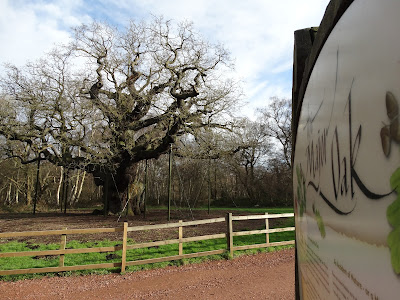 After visiting the ancient Major Oak, I too headed into Edwinstowe where I partook of an egg mayonaisse sandwich, a small scotch egg and a pint of milk from the local co-op. It was clouding over now as expected. Soon I was striding long the banks of The River Maun and back into the forest.
Ahead of me an imposing Victorian building loomed up amidst the trees - Archway House. It was built under the instructions of  The Duke of Portland in 1844 and was intended to be a feature upon his private driveway - a driveway that was never completed. Incredibly, he had planned his own private road, running twenty five miles from his lavish country seat at Welbeck Abbey all the way to Nottingham. Happily, parliament resisted his entreaties for the necessary permissions. It was, after all,  an outrageous idea of Donald Trump-like proportions.
I managed to get lost once  again while heading back to Budby and imagined snuggling down for the night under a tree with squirrels and badgers. Maybe I would see a campfire glowing in the nearby clearing with shadows of men clanking pewter tankards together while singing "Greensleeves". But then Budby came into view once more.
- January 29, 2016