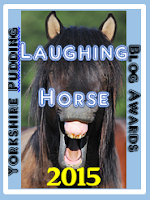 Although Lee from Tamborine Mountain, Queensland, Australia won the coveted "Blogger of the Year" award at the big bash in Orlando on New Year's Eve, several other bloggers were recognised for their work through 2015 and they are listed below. All are henceforth officially entitled to proudly display the exclusive 2015  Laughing Horse widget  within their blogs or sidebars.

The Awards Committee also noted the quality of photography within this thoughtful and accurately written blog. Mr Reed has an eye for the unusual and shows visitors many fascinating alternative views of England's capital city.

The Awards Committee noted the regularity of Jennifer's posts and her enthusiasm for the medium. Her openness was appreciated. She gives visitors an honest view of her wholesome working life in South Carolina with Gregg and her two dogs.

TOP WELSH BLOG
John Gray for "Going Gently"
The popularity of this well-maintained blog was noted by The Awards Committee. Mr Gray's honest and often self-deprecating posts provide both belly laughter and a clear window upon life for a mature couple and numerous pets in a Welsh village.

TOP GERMAN BLOG
Meike Riley for "From My Mental Library"
Though she was the deserved "Blogger of the Year" in 2014, Mrs Riley's committment to blogging did not wane in 2015. Country walks, photos, book reviews, history all added to a great blog that was again much appreciated by The Awards Committee.

TOP HEBRIDEAN BLOGGER
Graham Edwards for "Eagleton Notes"
Though his posts can be infrequent owing to dodgy internet connectivity, Mr Edwards provides readers with a fascinating view of his life on the Isle of Lewis, interlaced with recollections of earlier times and adventures. Noble, sensitive and sometimes very funny, "Eagleton Notes" continues to impress The Awards Committee. The quality of his photography was also appreciated.

TOP CANADIAN BLOG
Red for "Hiawatha House"
The Awards Committee recognised the eminently readable, varied and interesting nature of Red's posts throughout 2015. In addition, the kind and supportive nature of his comments on other people's blogs was given special mention.

TOP BLOG BY A MATURE BLOGGER
Janice Blawat for "Cosumne Girl"
Having only recently crossed the line into maturity, Ms James-Blawat continues to display a youthful enthusiasm for life in her well-expressed and well-illustrated blog. The Awards Committee referred to her as  a feisty blogger with strong opinions on a range of subjects but also a patient country woman who shows great expertise as a poultry enthusiast and cat lover.
____________________________________________________

The Awards Committee noted the invaluable services of several other bloggers who may not have received Laughing Horse widgets for last year's work but nevertheless deserve special mention. Some of these bloggers would undoubtedly have won awards were it not for large gaps or disruption in their blogging activity. They include Carol Cunningham for "A Small Life", Helen for "Helsie's Happenings", Bob Brague for "Rhymes With Plague", Brian Cutts for "Tannu Tuva", Mama Thyme for "Peace Thyme Garden and Weather Station", Ian Rhodes for "Shooting Parrots", Libby for "D-scribes", Mistress Hilly for "Hilltop Homesteader" and last but not least Kate Steeds for "The Last Visible Dog".

The Awards Committee hope that these "special mention" bloggers will not be "disheartened but will instead approach 2016 with added blogging vigour and inventiveness".
- January 03, 2016