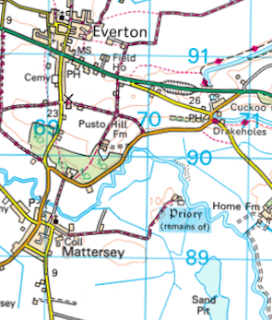 Mattersey is a village in North Nottinghamshire. Away from the main road, it is a peaceful place with a long history. There's an ancient church and some substantial properties that speak of the village's significance in past times. Certainly, its location - close to the navigable River Idle would have been important. Though the Idle is really just a large stream, it would have facilitated trade with the medieval port of Bawtry a few miles away and from there, The River Trent, The Humber and The North Sea.

Many times I have driven past the Mattersey road junction at nearby Everton but I had never been there till yesterday. I had a particular goal in mind and this involved driving along Abbey Road east of the village. Not the tarmacked Abbey Road made famous by The Beatles but a rough track with potholes and puddles.

For almost a mile I drove a bumpy, serpentine course at below ten miles an hour and then ahead I spotted my destination - Mattersey Priory - sometimes called Mattersey Abbey, rising out of the farmland and close to a bend in The River Idle. .Mattersey Priory - Link
Its construction commenced in 1185. The small Gilbertine priory was home to a dozen monks plus lay workers and for three hundred and fifty years it held economic and spiritual sway over the surrounding area. Of course there are no stone quarries thereabouts so the stone used to build Mattersey Priory must have been brought on rafts from Bawtry. It was probably extracted from quarries at Maltby - some twelve miles away.
Like other monastic settlements, the priory's power and very existence stuttered to a halt during the reign of Henry VIII and it was left in ruins. No doubt many of the original stones were purloined by local builders and I am sure that many were used to build the adjacent Abbey Farm. That's how it was in past centuries. Many historical buildings were treated like stone quarries. The same thing happened to lots of disused Greek and Roman structures.

I was alone at Mattersey Priory, wandering about the ruins. Not many people are as daft as me - weaving along a dirt track in early January after the wettest December on record just to see a pile of stones. But those stones sing eloquently of past times... the monks, religious belief, survival, superstition, government and the babbling River Idle, weaving its way to Bawtry and beyond in times when The Americas and Australia were undreamed of and our world was not only flat but the epicentre of the entire universe. 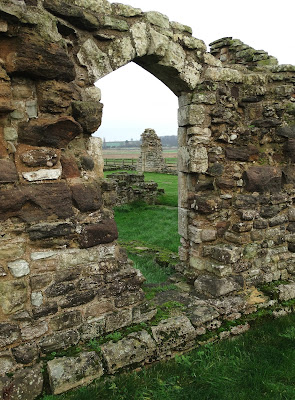