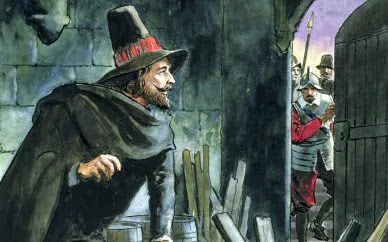 Guy Fawkes was a Yorkshireman and a rebel. Born in York in April 1570, he died from a broken neck after possibly tripping upon the gallows. Following his very public death in Westminster, London on January 31st 1606, he was "quartered". Afterwards, his body parts were distributed to "the four corners of the kingdom", to be displayed as a warning to other would-be traitors.

In the early hours of November 5th, 1605 Guy Fawkes was found in an "undercroft" beneath The House of Lords guarding some thirty six barrels of gunpowder. He and his fellow conspirators had placed them there - planning to blow up the parliament building above. Specifically they wished to assassinate the Protestant monarch - King James I and pave the way for a return to Catholic rule.

As I am not a religious historian, I find it difficult to fully understand the Catholic/Protestant tensions of those times but I do know that the animosities were not purely about religious belief. It was also about power, wealth, land ownership and relations with Rome where of course The Pope resided.

Guy Fawkes was acting on behalf of an entire movement. He didn't just wake up one day and think, "Oh, I'm going to blow up The Houses of Parliament". Underscoring his actions were years of intrigue and division as different political philosophies clashed or secretly  ate away at each other like bone diseases.

The Catholic/Protestant division was rife throughout Europe too and in his twenties Fawkes had fought for Catholic Spain in its Eighty Years War with the Protestant Dutch Republic. The bitterness went very deep.

On November 5th 1606, following The Gunpowder Plot, bonfires were lit all across the land and effigies of Guy Fawkes were burnt. All over England, that tradition has continued - for four hundred and thirteen years.

When I was a boy, Guy Fawkes Night - often called Bonfire Night - was one of the eagerly anticipated highlights of my year. It ranked alongside my birthday and Christmas Day. There were fireworks and toffee apples, baked potatoes and sparklers and of course "guys" stuffed with straw or old newspapers sitting atop our bonfires.


Every November 5th, I remember those old bonfires of yore. My father lighting rockets and shouting "Stand back!", my biscuit tin containing bangers and "traffic lights" or "volcano" fireworks, cinder toffee and Yorkshire parkin in the oven and the excited cheering when the lapping amber flames eventually reached the guy...
Remember, remember, the Fifth of November
Gunpowder treason and plot
I see no reason why gunpowder treason
Should ever be forgot
- November 05, 2019