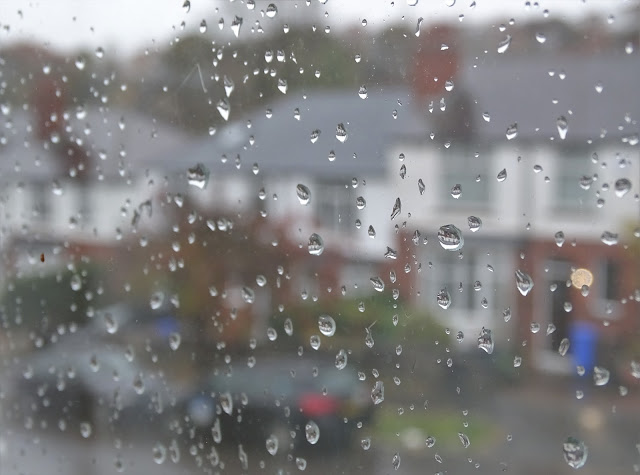 This is not a pleasant week here in northern England. All wet and grey and as I sit in our front room at eight thirty on this Thursday morning, rain is teeming down outside. The weather people tell us that it has set in for the day and tomorrow doesn't look much better either.

The spongy moors between here and Manchester will be sodden and streams and rivers will be swollen as they cascade, trundle and gush towards the sea. Reservoirs will be brimming and the footpaths I often walk will be treacherous.

This is not a day for going out. Shirley went out half an hour ago - off to catch a public bus into the city centre. She'll be working all day at the Sheffield Hallam University health centre - vaccinating dozens of students. Many will be from China. The increasing presence of Chinese students in this city is clear to all and there are several  building projects associated with this influx.

Meanwhile, in  British news channels, all the talk is of the forthcoming general election. It will be held on December 12th and no doubt I will be invited to work as a poll clerk. It will be a busy day with perhaps a 75% turnout. The day's pay will be rubbishy but it's nice to  be engaged in the processes of our so-called democracy.

Last night Odious Johnson launched the Conservative Party's campaign in Birmingham. It was stage-managed for television just like an American primary event. Supporters waved pre-printed party placards as Odious Johnson stood on a raised dais with the faces of intoxicated supporters behind him. The blunt and misleading  slogan, "Get Brexit Done!" was everywhere. I would prefer "Get Johnson Done!"

The path to December 12th will be bitter and unpleasant with accusations, lies and false promises. Odious Johnson has suppressed a major intelligence report that sheds light upon Russian involvement in the European Union referendum of June 2016. And it is patently obvious why he does not want that information to come out before the election. An army of Russian bots and Facebook infiltrators were working overtime before that referendum to cunningly swing the country to "Leave". It was all good practice ahead of the last presidential election in America.

Calm down young man - I say to myself - calm down!

There are many things I might have blogged about this morning but as the rain continues to pour I will simply leave you with some annual rainfall figures that demonstrate that England is not as wet as outsiders and indeed insiders sometimes think:-