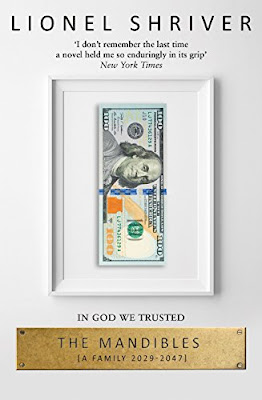 Now living in England, Lionel Shriver is a gifted writer. She adopted her curious first name in the late sixties when she was a rebellious teenager in North Carolina. How could she be a tomboy with a name like Margaret?

I have now read four of Lionel Shriver's sixteen novels - finishing the last one yesterday afternoon. It was a five hundred page tome titled  "The Mandibles: A Family, 2029–2047". It is a profoundly frightening portrait of how quickly the agreed rules of society can fall apart without money to oil the wheels.

It focuses upon a single family in our not too distant future. Once comfortable subscribers to the old American Dream, The Mandibles find themselves in threatening new world in which the economy of the USA  is in meltdown. The dollar becomes a worthless anachronism as other nations climb the ladder. Amusingly, even Mexico overtakes The States and they build a wall to keep out desperate immigrants from north of the border!

The American government becomes a vindictive organisation, suppressing its citizens while observing them like Big Brother in George Orwell's "1984" . As society crumbles, it is almost impossible for members of the Mandible family to experience the feeling of  freedom  any more. Life is all about survival now. As the writer says, “Real poverty is about doing what you have to do as opposed to what you want.”

Lionel Shriver had clearly researched the language and principles of modern economics in some depth and she employed this knowledge to improve the believability of her vision of a degraded and almost hopeless near future. However, some of the sidetracks into economics were out of my comfort zone and I struggled with them.

Nonetheless, this was an eerily convincing picture of a possible future world - just round the next bend.  But there were comedy moments too and some of the writing was consciously tongue-in-cheek. Ultimately, there is a fairly happy ending as the surviving members of the Mandible clan find sanctuary in the breakaway USN - United States of Nevada.
- November 20, 2019