As a news junkie, my "go to" website is the BBC News. In my humble opinion, itt is brilliant. It gives up-to-date local news, national news, news from around the world, sports news, entertainment, comprehensive weather forecasts and much more. I have yet to find a better news website anywhere on the internet.

When you first click in, there will be a headline story. This often changes as each day progresses. Yesterday evening's headline might well have been, "Trump Misused Charity Fund" or "Johnson Keeps Russia Report From Public" or "Children Are Still Starving In Africa". But it was none of these. It was in fact "Biblical Rainfall Leaves Streets Flooded". 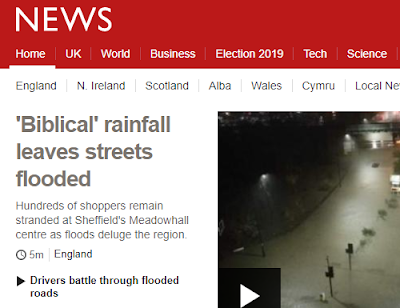 And what is more, that report was about my home city - Sheffield and its close neighbour - Rotherham. We had an absolute deluge of rain yesterday. To use a Yorkshire expression. "it pissed it down" all day.

Like Rome, Sheffield is built on seven hills. Those of us who live on the hills are pretty much immune from flooding but those who live in the valleys, close to the rivers and brooks will occasionally experience floods. Back in 2007, I reported the last serious flooding episode to hit the city as The River Don burst its banks and young Ryan Parry drowned. Go here.

As far as I know, nobody drowned yesterday but many vehicles were abandoned and at The Meadowhall Shopping Centre on the edge of the city, more than a hundred shoppers simply could not get home. They had to sleep there. 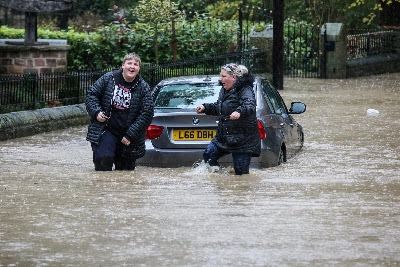 I was like a caged beast - going stir crazy. I couldn't even get out to deposit items in our recycling bins. The rain flowed down our street like a stream. At ten o'clock in the evening I donned my raincoat and headed out to the local pub - just to escape from the house. My trews were soaked when I got there and outside a waterlogged double decker bus was receiving the attention of a mechanic dressed like a lifeboat man.

Two of Shirley's nurse colleagues were called back to their  homes during the day because of water inundation.

This morning, as I tap away at this keyboard, God's wrath has diminished and I can see some blue sky. It is no longer raining. Praise The Lord! I think we are going to survive but where was Noah when we needed him?
- November 08, 2019