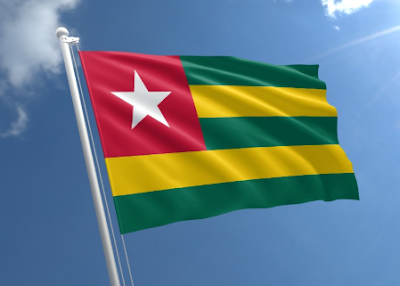 All my life I have been interested in geography. Though I might not know much about physics or engines, when a geographical question comes up in a pub or TV quiz I will generally know the answer. As longtime visitors to this blog may recall, I have occasionally revealed my geographical passion by blogging about obscure countries such as Kyrgyzstan and Tajikistan.

Today The Yorkshire Pudding spotlight of geographical curiosity illuminates an African country - namely, Togo. Now there are fifty four countries in Africa and in terms of population, Togo ranks thirty third. Eight million people live there. The country is squeezed between Ghana to the west and Benin to the east.

The map below shows the exact location of Togo in West Africa. As you can see, it is a long, thin country with a short Atlantic coastline. That coastline is only thirty two miles across but it's 320 miles from the Burkina Faso border to the north. 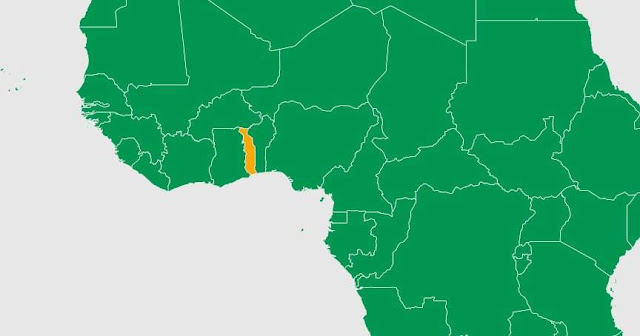 The birth of Togo as a distinct and independent country was a relatively recent occurrence. It achieved independence from France in 1960. Previously, in the late nineteenth century,  it had been a German protectorate and before that, like most West African countries its borders were quite fluid. The very idea of a "country" as we know that concept today is largely a western construct. Once Togo was part of what is sometimes known as "The Slave Coast" for it was from this part of Africa that the brutal slave trade began in the sixteenth century.
Ethnically, culturally and religiously, Togo is a veritable bouillabaisse of diversity. A third of all nationals are unapologetic animists and there are some forty distinct ethic groups - each speaking their own language. It must be an exceedingly difficult country to pull together as one with various cultural tensions. The current elected leader is a wealthy fifty three year old fellow called Faure Gnassingbé who does not necessarily appreciate all of the guiding principles of democracy. He certainly has blood on his hands.
Agriculture is vital to the country's economy but mining of phosphates is also an important feature. It ranks 145th in the world in terms of its national wealth. According to Credit Suisse it has a national wealth of just five billion dollars - compared with say Denmark which has a much smaller population but a national wealth of  1,271 billion dollars.

The capital of Togo is the city of Lomé, developed by Europeans as a trading port. It now has an overall population of 1.5 million. Like many African cities, its population continues to grow at an alarming rate year by year. Back in 1950, only thirty thousand people lived there. The burgeoning growth puts enormous pressure on infrastructure and the natural environment.

Until researching this blogpost, the only Togolese person I had ever heard of was the footballer  Emmanuel Adebayor who played for Arsenal, Manchester City and Tottenham Hotspur in The English Premier League. He became African Footballer of the Year in 2008 and this season, at the age of 35 he is still playing the beautiful game over  in Turkey.
- November 01, 2019