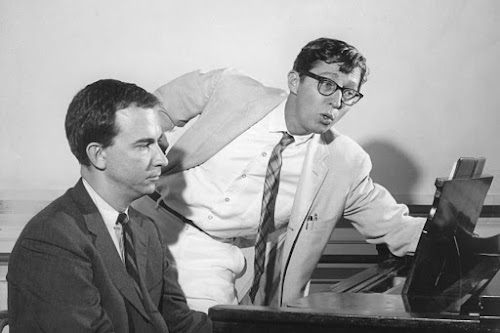 Harvey Schmidt and Tom Jones in 1960
"Try to Remember" is a song that has echoed in the corridors of my mind since I first heard it - back in the nineteen sixties. It was written by Harvey Schmidt and Thomas Jones in 1960 for a musical comedy show called "The Fantasticks" and first released as a recording by Jerry Orbach in April of that year.

Other recording artistes have done better with the song in my view, slowing it down and pondering upon the lyrics - adding a poignancy to them that perhaps did not exist in Jerry Orbach's version. I especially like versions by Harry Belafonte, Barry McGuire and Gladys Knight and the Pips though many other people have recorded it.

In order to share the song with you I have chosen the version by arch-crooner Andy Williams who died in Branson, Missouri in 2012:-

Of course it is now September and in the northern hemisphere at least, it is a month that speaks of times past and summer's end. Somehow "Try to Remember" captures something of that shared sense of time passing and happy times gone by. One thing that has always intrigued me about the song is the advice or instruction to "follow". What can it mean?
Upon reflection, I think it is connected with the original comedy show from which the song came. There, "Try to Remember" was sung right at the beginning and the singer is probably inviting the audience to "follow" proceedings.- see how the show turns out.
- September 07, 2020