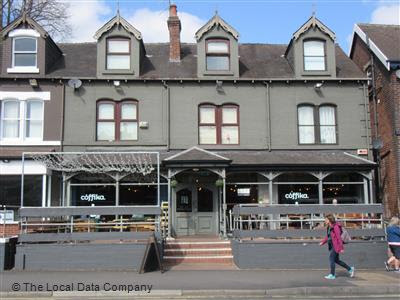 Lovely weather again yesterday. Here in the wilds of northern England we have enjoyed a fortnight of golden days as Summer reluctantly passes her baton to Autumn. I would have been out walking somewhere - plodding along yet  more miles of public footpath and quiet lane.  However, socialisation got in the way.

At ten in the morning we met up with four other sixty somethings in "Coffika" - a refurbished coffee shop on Ecclesall Road. We didn't leave there till just before midday. There were Frances's in-laws - Cheryl and Pedr and old friends Linda and David. We rabbited away happily and at one point I was prompted to tell the story of my brother Paul's death in 2010, including the traditional Irish wake and the funeral phases. Ten years and it still seems like a dream.  Why can't I speak to him on the telephone?

There was a three hour gap before the next event listed on my crammed social calendar. In that gap I ate a peppered salami and cucumber sandwich and visited a picture framery to arrange the framing of a tea poster that Frances and Stewart brought back from their honeymoon in Sri Lanka. It will be her thirty second  birthday present yet  in spite of the quoted price, the frame will not be crafted from precious metal. Ah well, you're only thirty two once.

Three o'clock found me in the beer garden of "The Hammer and Pincers" waiting for Mick, Mike and Danny. Another two hours of happy conversation lubricated not by coffee but  by foaming pints of Stones best bitter. I have been meeting up regularly with Mick and Mike for twenty five years now. Ex-policeman Danny is a more recent addition and he's nice enough. It's good to be at ease with people you like - just being yourself as the talk flows along like a Peak District stream. Nothing to prove.

I rode home on the 88 bus with my face covered and as usual prepared the evening meal - slices of Sunday's roasted pork in gravy with mashed potato, green beans, roasted courgette cubes and of course the pièce de résistance - Yorkshire puddings that I had saved in our freezer.
It is now six fifty on Tuesday morning and unlike yesterday my social diary is blessedly empty. Shirley will be working all day and the weather forecast is again benign  so it's a great opportunity to ramble on my own once more. I will be driving over the hills to Glossop and plodding a few miles south of there. Socialisation is all very well and good but you cannot beat your own company and the undulations of your private thoughts. 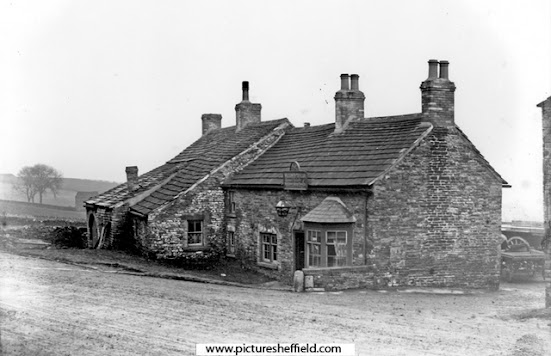 "The Hammer and Pincers" in past times before suburban growth
absorbed it into the city. Once it stood by a toll road in glorious isolation.
- September 22, 2020