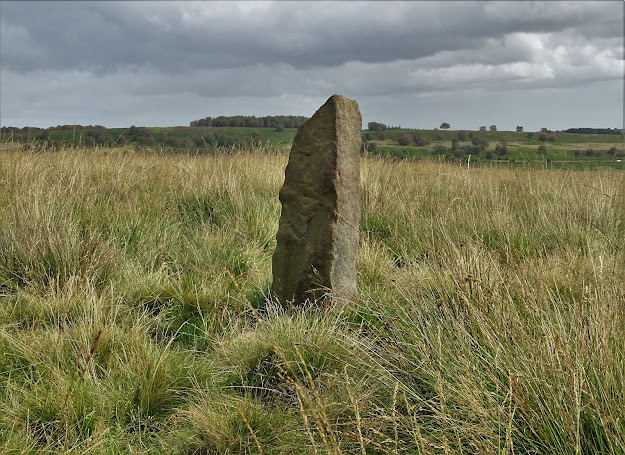 Big Moor is a large tract of moorland around five miles south of this house. Most people who drive past it won't realise that it hosts many remnants from times past including medieval guideposts like the one shown above, stone circles, ancient field systems and the degraded remains of a Bronze Age settlement that is known as Swine Sty for some inexplicable reason.
On Thursday, I rambled upon Big Moor after leaving Clint in the lee of a stone wall by the Curbar Edge road. The first person I saw was a middle-aged woman with a dog. We smiled at each other and said "hello" - following the unspoken ramblers' code of good fellowship. Then a young man with a heavy backpack  approached. "Hello" we said to each other.
When I reached Swine Sty I met two men - a father and son. The son is in the army. We said "hello" but then we got talking for a few minutes. They were from Powys in Wales. I told them about  Big Moor and that we were standing in what what was a Bronze Age settlement 4000 years ago. Suddenly, I seemed like an expert guide or something. Not a role I am used to. 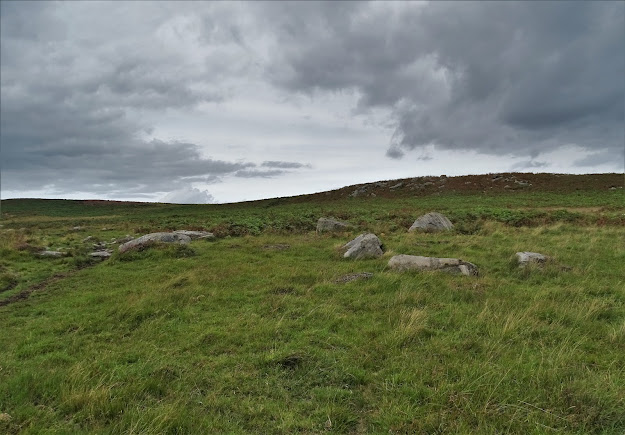 Swine Sty
To be frank, Swine Sty just looks like a bunch or random rocks here and there with a raised plateau above it. Only  archaeologists who have studied the site understand what the rocks mean and of course the story has been confused by quarrying activity, grouse shooting and military training. However, it is most certain that there was a small community there. The climate was warmer then. They raised crops and a few animals above the boggy ground.
The population of the British Isles at that time was less than a million. This was many centuries before Christianity first arrived on these shores. Bronze Age people lived in harmony with Nature, revered their dead and paid homage to the sun, the stars and the passing of seasons. Their lives would have been unbelievably hard as they battled for survival with each passing moon. 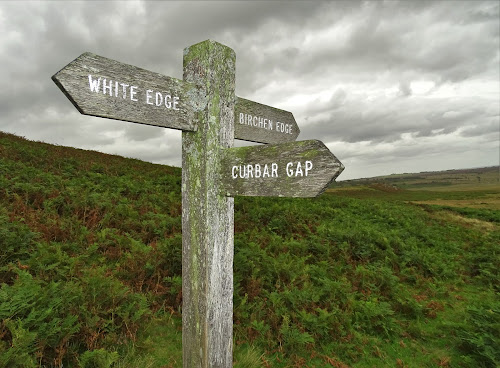 As you can see, it was a grey day - but thankfully dry. I even used the flash on my camera to enhance the signpost picture shown above. I walked a further mile up to the triangulation pillar on White Edge. Two couples passed me on the rocky path. Of course we said "hello" to each other and smiled in the usual friendly way. It's just part of British country walking culture and that's all there is to it.
Yesterday, I was back in the area. It was still grey but also remained dry. I didn't walk far - jut up onto the ridge by Fox Lane. I took this picture of another guidepost that sits upon an ancient cross-Pennine trade route. 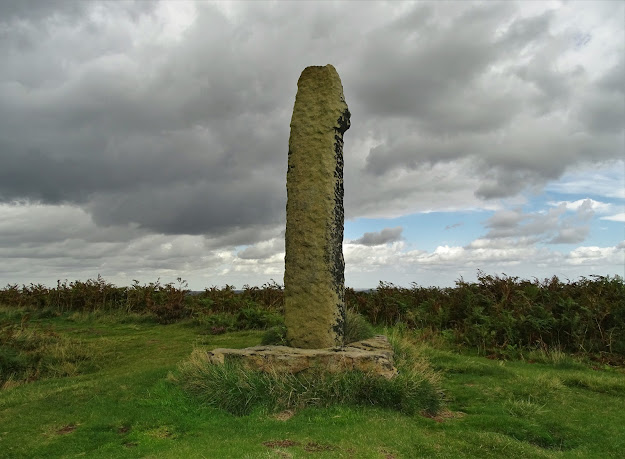 Further along the ridge, I spotted this exposed spruce tree bent double by the prevailing wind. What an amazing sight! I plan to take a few more photographs of that tree in different light conditions. Nearby  a man was sitting in the heather admiring the view with his watchful Alsatian dog. Of course we exchanged polite "hellos" - the man and I, I mean - not the dog. That would have been weird. Almost as weird as having a talking silver car called Clint. 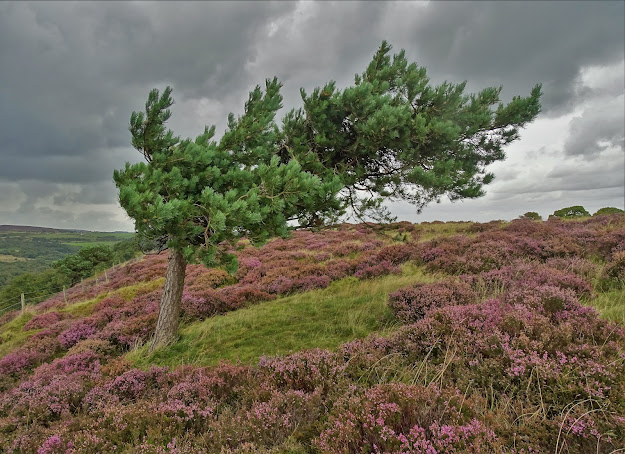