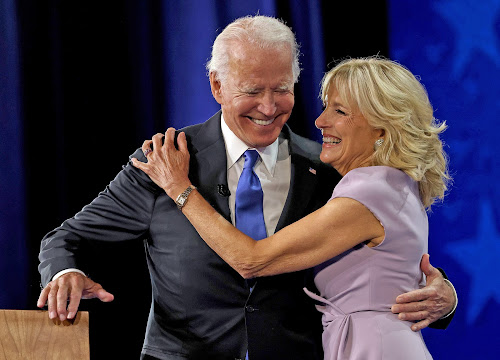 In the last couple of weeks, the narcissist who currently occupies The White House has stolen a march on Joe Biden. He has cunningly put the pre-election focus on law and order, claiming that he is tough on criminality. Ironically, on his watch, there have been riots in the streets of several American cities. The cracks in American society have threatened to become yawning fissures.and yet the 45th president has sought to blame all of this on Democrats. It's like a magician's trick - twisting the truth so outrageously. An illusion. He can't even bring himself to say the names of George Floyd, Jacob Blake or Breonna Taylor.

If I were a speechwriter for Joe Biden, I would put these words in his mouth:-

"Okay guys. Over the last couple of weeks we have allowed Trump to rant about law and order. If I might be so bold, today I would like to switch the focus to something else, something that has touched every American household, something that is very much still with us, something that Trump doesn't want to talk about - COVID 19. Yeah. Let's talk about that. It's important. COVID 19.

Under the presidency of Donald John Trump, 200,000 Americans have died from the coronavirus. I will say that again, slowly, two hundred thousand! That's about the same as the entire population of Salt Lake City, Utah. And it has happened on Trump's watch.

Don't get me wrong everybody. I am not saying that Trump is responsible for the virus. He did not bring it to The United States but what I am saying is that his response to it has been cavalier and heartless. Throughout the pandemic he has tried to brush it away as if it was an irritating insect or something. The guy even takes pride in not wearing a mask and his most ardent supporters follow his lead

Like a lowlife racist he has referred to COVID 19 as "the kung fu virus" or "The Chinese virus" instead of taking responsibility, leading by example, marshalling our people, our scientists, mayors and health professionals to defeat this terrible enemy. I will say it again my friends - 200,000 have died. Far more than should have died in our great country.

The president downplays COVID 19 all the time but it has happened on his watch. No wonder he doesn't want to talk about it. No wonder he tried to hijack the agenda - trying to manipulate questions of law and order to his advantage. He knows that he has got some serious questions to answer about the coronavirus. 200,000 - the same size as Amarillo, Texas or Huntington Beach, California.

Throughout the months that this virus has been with us, the president has tried to dismiss it, downplay it, pretend it is not there. He has made up lies about it. Many lies. Fake stuff. Fake. He even said we might be able to tackle it with strong disinfectant and bright light! I ask you. What kind of a leader says something like that? It is just plain stupid. Stupid and wrong.

The first responsibility of any American president is to protect our people. We are not "losers" nor "suckers", we are proud American citizens. So I say to our media people - Next time you get a chance to quiz the president don't let him blind you, turning the election agenda back to the issue of law and order. Ask him questions about coronavirus and how he has addressed it. You owe it to the 200,000 who have gone. May they rest in peace."

Mr Biden then bares his pearly white teeth and with one arm around Mrs Jill Biden he uses the other to wave to those assembled and to the vast television audience. They leave the stage.
"How'd I do honey?" asks Mr Biden.
"You were brilliant Joe!" replies Mrs Biden. "Who on earth wrote that speech?"
"Oh just some English guy. Now let's go for pizza."
- September 05, 2020