If somebody staggered from a pub with car keys in hand, fully intending to risk other people's lives by attempting to drive home, onlookers would be rightly horrified. That sense of horror needs to be replicated when we spot drivers on mobile phones. Personally, I notice them all the time - drivers of taxis, vans, concrete wagons and family cars. It's like an epidemic. Perhaps more horrific is the sight of drivers looking down at their laps as they drive while attempting to text at the same time. This is obviously harder to spot but it happens more than you might think. 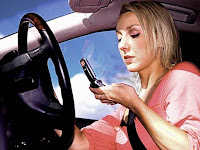 I have ranted about mobiles in cars before so obviously I was delighted when the Ministry of Justice announced yesterday that 164,900 fixed penalty notices for using mobile phones while driving were issued in 2006. However, the tide has not yet turned. How many more deaths have to happen before the message truly hits home?

This is a comment left by a visitor after a BBC news item on this very subject:-
My fiance was killed by someone who was using a mobile while driving. Had that driver been prosecuted previously it may have made him think before doing it again - and my fiance may still be alive. The penalty can't be harsh enough as far as I'm concerned.
On this topic, I have a little side thought. Why should any driver be allowed to have one-way glass or obscuring glass in their car windows? This prevents police or other law enforcement officers from spotting wrongdoing - including mobile phone use while in transit. It's not right.
- May 01, 2008