Many days we live are unremarkable and we forget them. Other days are chiselled in one's memory forever - such as your wedding day, the day your first child was born, winning a prize, securing a job promotion. But rarely are such days like the buses that we wait for - two coming along at once. But that's how it was for me yesterday. At six thirty in the morning, the phone rang. It was Shirley's sister, Carolyn, announcing that their mother Winnie had taken a turn for the worse and had died a few minutes earlier. Although the Big C had weakened her and driven her to her bed, death was certainly not expected this quickly.

And so it was that I set out to Wembley on my own. I managed to offload Shirley's rail ticket by handing it to a medical student who was London bound. I learnt her whole twenty three year long life story but she learnt nothing of mine - the conversational tennis was all one way traffic. So I was glad when by Leicester she retreated to her headphones and laptop.
At Kings Cross I was fretting. Watching everybody who disembarked from every train. With no mobile phone, I couldn't easily contact Tony and Fiona who were coming to London from Hull with my precious ticket - now worth the princely sum of £196! (2x£98). Their train had been repeatedly delayed and arrived at the station an hour late. Phew!
Tube to Liverpool St. Scurry to the Travelodge. Back on the tube to Wembley Park. Then out into the sunshine of Wembley Way. The great arch of the new Wembley beckoned us like Mecca - and I don't mean the bingo halls of that name! The black and amber army were on the move. 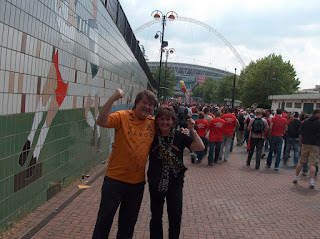 By our turnstiles, I tried to sell Shirley's ticket for twenty minutes but it was futile so I gave up and ventured into our nation's finest football stadium. As an aside, might I just say that it is absolutely disgusting and wrong that a huge swathe of seats on one side of the pitch are essentially "owned" by corporate rich bastards who will often not even bother turning up for games. This is our national stadium for Christ's sake! And these empty seats provide the best view of the game in progress, situated as they are on the halfway line. Utterly disgraceful! 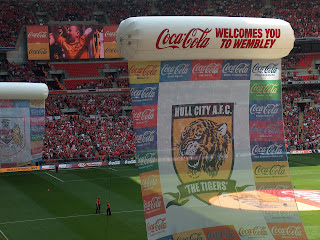 The game itself will be remembered for Dean Windass's fantastic volley ten minutes before halftime. The ball rocketed into the net and sent 37000 Hull fans into a state of sheer delirium. In the second half, Bristol City pressed hard but without a cutting edge up front. I was as nervous as hell, watching the minutes tick away. It seemed as if this was going to be our dream day but with all the misery and disappointment we have known over the years, I feared that failure would be snatched from the jaws of success until the referee blew his whistle and we had won! The greatest day in Hull City's history. The biggest prize in world football. The Premiership! Tears streamed down my cheeks and we hugged everyone around us - shaking hands, kissing, patting backs. We had bloody done it! The Tigers in the Premiership! I do not give a fig that we will struggle amongst the big boys next season. This was our day and nobody will ever take it from us. We are 'Ull! We are 'Ull! We are 'Ull! 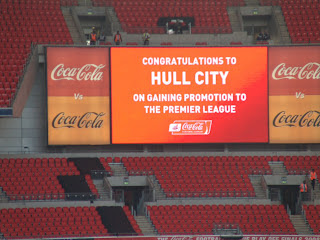 As I said to Shirley in the morning - her mum's name was Winifred, Winnie - often shortened to Win. Win! It was auspicious and I dedicate that historical game to her memory. May she rest in peace forevermore.
- May 25, 2008