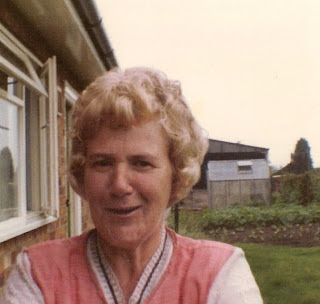 I am living the lonely bachelor lifestyle at home at the moment - self-sufficient with a big empty bed. Why? Shirley has gone east to be with her mother Winnie. To be blunt, she is dying of cancer - somewhere in the bowel region. Three weeks ago she had a cholostomy operation in Scunthorpe, then she went to an old folks' residential home near Gainsborough before electing to go home. Shirley and her sister had to physically carry her from the car into her bungalow.

Apparently, there wasn't much to carry - such has been her recent weight loss. Previously she was a big, healthy farmer's wife. Now she's skin and bone with no prospect of recovery. It's just a question of time. She's seventy eight.
I have known her for nigh on thirty years. She has always been most kind to me and a very decent person who has always lived within three miles of her birthplace - choosing to live a simple country life, raising a family by the River Trent where the family farm still stands - now owned by someone else. Her husband, Charlie, passed away seven years ago - also a victim of cancer. Neither of them ever smoked or drank. They ate healthily, looked after themselves and took exercise. That's the Big C for you. You never know for sure where it will strike. Thankfully, Winnie is not in pain.
I will be picking Ian up and driving over to The Isle of Axholme to see Winnie tomorrow evening - very possibly for the last time. Shirley remains determined to come down to London for the Championship final but will of course stay with her mother if death appears imminent. The people at her health centre have been great in allowing her as much paid compassionate leave as she needs.
- May 22, 2008