Yesterday, Shirley and I returned to Hull for the victory celebrations. Along with 50,000 others gathered in Victoria Square, we welcomed The Tigers home and sang their praises. The match winning hero, Hull lad Dean Windass - climbed over the safety barrier on the City Hall balcony to stand bravely on the narrow parapet with the Play Off Final trophy held aloft in his outstretched arms. No wonder entrpreneurial T-shirt sellers had produced hundreds of Superman shirts with "Windass 9" on the back. This was undoubtedly the biggest single day in Hull's history since the city was badly bombed by the German Luftwaffe during World War II. The city of Hull has had so many knocks in recent years. This sporting success has already given the city a tremendous lift. To see scenes of the victory celebrations click on the link below:-
http://news.bbc.co.uk/sport1/hi/football/7420786.stm

And here are the scenes at Wembley as Dean Windass struck the winning goal:-

Three of my own pictures:- 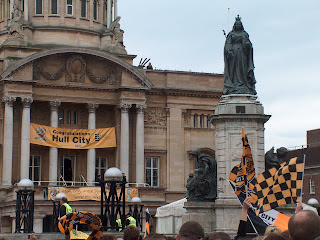 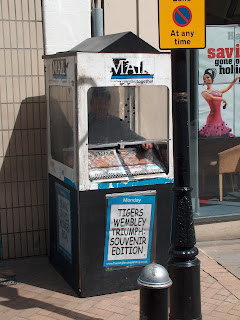 "Hull Daily Mail" news vendor in his booth with stacks of souvenir editions. 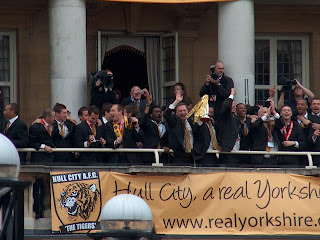 On the balcony of The City Hall, Chairman Paul Duffen and manager Phil Brown hold the trophy aloft.