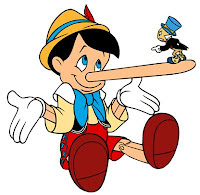 Politicians lie all the time. When comedians tell jokes they are usually just lies - those funny things never really happened. When you think of it, any novel is just a massive lie - a pretence - the spinning of a yarn. Advertisers lie. Priests, parsons, mullahs and rabbis lie as they reinterpret holy books which are themselves just strings of untruths and imagined truths - lies in other words.

From time to time we all tell lies. We exaggerate achievements, inflate stories or miss out vital truths. In this, I am as remiss as anyone even though one of the fundamental moral tenets I try hard to uphold is contained in the saying "Honesty is the best policy".
I remember when I was nine years old. On Tuesdays, after the school day had ended, I would ride on a school bus to the nearby village of Catwick to receive piano lessons from Mrs Maddox. She must have been something of a local entepreneur because she was always baking huge trays of tarts and scones, sausage rolls and vol-au-vents as well as teaching piano to local children.

I hated those trips. Hated the mechanical and heartless way in which Mrs Maddox attempted to teach piano skills. There was no love, no fun, no delight. You had your scales to do and dull pieces to learn by heart - "Where O Where Has My Little Dog Gone?" Where indeed?

Each week I gave the overweight, bespectacled and bepowdered middle aged lady my precious shillings. Frequently, she would leave the forty five minute lesson to deliver baking while I continued with my tedious practice in her equally dull living room with its chintz curtains, swirling Axminster carpet and flock wallpaper. I don't think this is what my parents were expecting from a piano teacher - someone who would bobby off on her rounds for most of the lesson.
Anyway, one week I was so utterly and mind numbingly bored that I left the piano stool and wandered into the kitchen where I spotted a box of matches next to a packet of "Number 6" 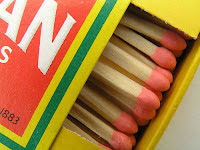 cigarettes. I struck a match and watched it burn. Then I wandered back into the musical torture chamber and well, I cannot remember why - but I decided to test a match flame on one of Mrs Maddox's tassle-edged cushions. It flared up so I stomped it out and put the cushion back on the armchair.
Hearing my long distance piano teacher returning in her car, I returned to the dreaded piano stool. However, as soon as Mrs Maddox came in the room she sniffed my offence and was quickly on to the singed cushion. I tried to lie my way out of it - saying I knew nothing about that horrible cushion. Of course, she didn't believe me and ordered me out of her house, saying that I had to tell my parents what I had done and that I wasn't to come back again.

I was confused and ashamed of myself. I just couldn't bring myself to tell mum or dad what I had done and returned to piano practice the following week as if nothing had happened. Mrs Maddox never delivered baking on my time again and later I became a concert pianist - wowing audiences from Vienna to New York. (The last bit is another lie!)
- May 06, 2008