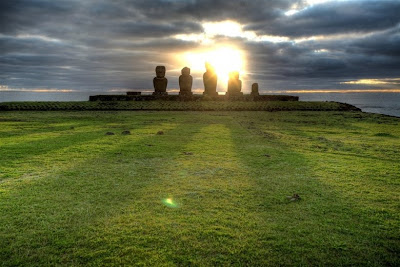 So dear visitors, I made it to Rapa Nui, Isla de Pascua, Easter Island which ever you choose to call it... and I am not disappointed I can tell you.
On Monday I scrambled down inside Ranu Kau crater to a unique microclimate, sheltered from the worst of Pacific gales and from the encroachment of disease and human interference. I felt like Simon in "Lord of The Flies", gasping in the thick green jungle undergrowth and further along the crater lake´s tangled edge I discovered a huge rock inscribed with petroglyphs from long ago.
Back on the crater rim having sweltered in the sunshine on the long climb back, I collapsed in a heap before heading down to the broken "ahu" at Vinapu. So many "moai" were pushed over or broken up perhaps in inter-tribal warfare or because the old certainties of the island were disappearing...but you still sense the echoes of the amazing culture that was developed here in total ignorance of the outer world which lay over two thousand five hundred miles away.
For the first people of Rapa Nui, this was their entire world and I feel privileged, even a little humbled to have this opportunity to witness first hand palpable evidence of those lost and distant times. I´ll tell you more when I am not in an expensive little internet cafe where speed of internet access is clearly not a priority but hey... blogging from Easter Island.... isn´t that just amazing anyway!
- October 28, 2009