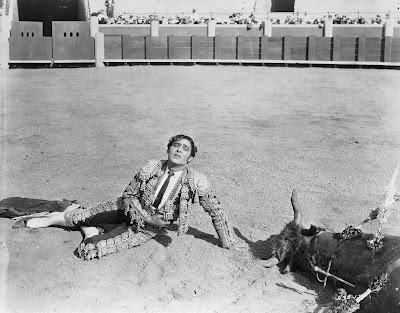 Rudolph Valentino in the 1922 film version of "Blood and Sand"
We may think that we are free. Independent people who can make up our own minds and take on the world but we're not, not really. Look in a mirror and what do you see? You see inherited genetic patterns. The shape of your eyes, the colour of your skin, your hair, your height. And if you listen to yourself you hear the accents of the adults who raised you - mostly parents. Their influence upon you is like the veins in Blue Stilton cheese - inextricable - no matter how much you may squirm and protest.
The spoken words that escape our lips are like signatures - personal and rather unique. They define us as much as our actions do. We think that we are in control of them. We think that we are choosing them as they tumble out of us in chains. In states of exasperation, annoyance, amazement or confusion, stock phrases or single words emerge to ease or to signify those moments. And very often these expressions will have been distilled from our childhoods. Heard expressions repeated. Echoes of the past.
One of my pet expressions is "Blood and sand!" I remember my mother using it but never consciously sought to imitate her and besides, how did she acquire it? I see Tony Blair playing games with the truth at the Iraq Inquiry - "Blood and sand!" I mutter. The car hits a pothole in the road following the recent Arctic weather - "Blood and sand!" On the TV they're going to have a celebrity dancing competition for disabled people in wheelchairs - "Blood and sand!"
But where did this odd expression come from? Apparently, it's the title of a Spanish novel about bullfighting published in 1909 by Vicente Blasco Ibánez (the Spanish title is "Sangre y Arena"). This story has been filmed several times, most famously starring Rudolph Valentino. I dimly recall my mum talking about Valentino. She remembered him from the movies of the early nineteen thirties but is that how she absorbed the expression? Indeed, does the expression predate the 1909 novel?
If only there were an archaeological "Time Team" for words.
The English language is brilliant at accepting new words, opening doors from other languages and recognising the innovations of youth and technology. But how open are we as individuals? Some people want their English to remain fixed in time like Roman ruins whereas others sponge up the latest words and expressions as gladly as seagulls chasing trawlers. It's complicated. The words we choose and why we choose them... but I think that in essence they are as much a part of our inheritance as the colour of our irises and the shape of our toes. Blood and sand! At one thirty in the morning...perhaps I'm talking tosh - whatever that is.
- February 06, 2010