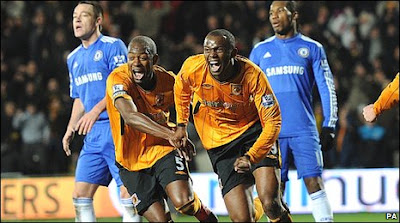 Gardner and Mouyokolo celebrate with Terry and Drogba behind.
Riding on a double decker bus from the "park and ride". It's full of pilgrims in black and amber. Scarves and bobble hats, replica shirts, manager's coats. Along Anlaby Road there are fans in pubs, fans queuing in kebab and fish and chip shops, fans just walking along to the game. Alighting the bus as usual there's the guy with dozens of shiny City lapel badges on a big felt board. £1.50 a shot.

Buy a programme. Skipper Anthony Gardner on the front. Buy a halftime draw ticket. Up to our turnstile - number thirty. Rip out the season ticket - number twenty. No bodysearches here as at Stalag Man City and I'm carrying a supermarket bag crammed with semtex, flares and a heat-seeking missile. Up the concrete stairs right to the top of the stadium. Up to our seats.
Soon the teams are out. Over the loudspeakers - "Tiger Tiger burning bright in the forests of the night". They line up. They shake hands. The whistle blows. We're off. We press. We look "up for it". England captain John Terry gets the ball. "Scandal Skipper". He's roundly booed. "Terry! Terry! Where's your wife? Terry! Where's your wife?" We get corners. Chelsea look subdued. Their captain made a laughing stock by the media. His cheated wife hiding in Dubai. This is not "Team Bridge". It's "Team Terry".
We sing. "Silverware? We don't care. We follow the City everywhere!" And then...and then another corner. For once Hunt hits the right spot and there's young Steven Mouyokolo - typical French name that. He meets the ball perfectly, beautifully and powers it pasts the hapless Peter Cech in his nancy boy scrum cap. What a wonderful header! The black and amber pilgrims go wild. Our cutprice, make-do team of minnows and maybes is beating the mighty Chelsea. Chelski. A Russian oligarch's plaything. And we deserve it. Deserve to be ahead.
Just before halftime. Just before halftime. We have been here before. A dubious free kick award on the edge of the box. Tony says - "Why don't they have a defender guarding that post?" And yes. Didier Drogba, just back from the African Nations Cup, manages to pierce the wall with his driven free kick. Sick. Sick. Chelski have equalised. It's undeserved.
After the break, we give as good as we get. We have chances. They have chances. Our lads look determined, together. Battling. Team spirit. Ashley Cole comes on so it's "Ashley! Ashley! Watch your wife!" In the final minute Sturridge closes in on goal from the left. Oh no! Not again! He hammers the ball but Myhill saves magnificently. "We are Ull! We are Ull! We are Ull!". The whistle blows. A point against Chelsea - the league leaders. We'll take a point but it should have been three.
Down the stairs. The black and amber army. Heading home. Proud of our lads. Mouyokolo and the new lad - teenager Tom Cairney. Real potential. On Radio Humberside as we drive the motorways home to Sheffield we hear the eloquent Dutchman - George Boateng sing Cairney's praises - "I'm telling you. He is a future England star". It was a great night. A wonderful night. And we all lived happily ever after... well till Saturday when we play Manchester City again. Team Bridge.
- February 03, 2010