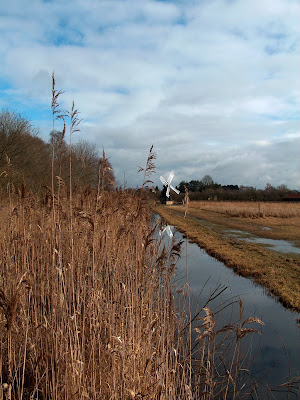 At Wicken Fen
Living here, it is easy to forget that England has so much variety, so much beauty, so much history, so much evidence of our forefathers' ingenuity.
Shirley and I decided to have a weekend break in an area of England we hardly know - the fenland north of Cambridge. Here the rich peaty soil is as black as coal. The mainly flat landscape is criss-crossed with dykes and ditches that were first dug by hand in medieval times to drain what was once a waterlogged marshy world. Above those marshes, occasional clay and gravelly hillocks rose - perhaps only a few feet higher than the surrounding marshes but it was here that ancient fenland settlements grew like islands. One such island was The Isle of Eels where the tiny city of Ely is situated. In medieval times eels were incredibly plentiful in the area and they were an important source of both food and wealth. It is said that each stone of the magnificent Ely Cathedral was paid for in eels.
Ely Cathedral began as a simple Saxon church in AD 673, founded by Saint or Queen Ethelreda. So when the Normans arrived, there had already been an important place of worship in Ely for four hundred years. They set about constructing a vast abbey and monastic complex. That job took over a hundred years to complete and then in the fourteenth century, reflecting East Anglia's economic power, further additions were made including the unique "Octagon" in the centre of the cathedral with its lantern tower that rises 43 metres above the ground. 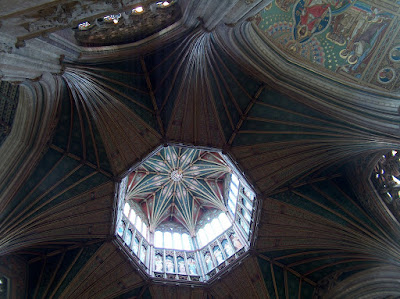 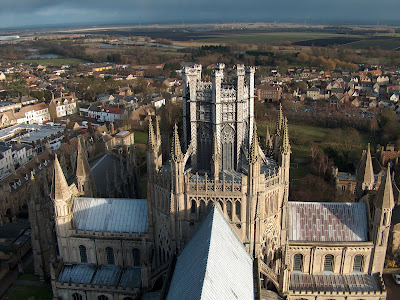 Above - Ely's "lantern" - internal and external views.
For me one fascinating aspect of medieval church construction concerns the origins of the stones that were used. Around Ely there is no stone at all. The limestone that was selected had to be brought along ancient waterways by barge from quarries over fifty miles away. Imagine that! Hewing huge blocks, dragging them onto carts, taking them to primitive wooden wharves to manoeuvre on to wooden barges that were powered by sails or horses and then days later dragging those same blocks from the Great Ouse wharf at Ely before hauling them up to the cathedral site. Voyage after voyage. The audacity of it! And what was driving them? The power of Christian belief or some sort of economic might that had to declare its presence?
On Friday night we had an amazing curry in the Sylhet curry house on Market Street, drank several beers on Saturday night and on Sunday morning we headed south to Wicken Fen - a National Trust property. Wicken is both a bird sanctuary and a piece of the original fenland landscape with sedge meadows, an original wind-driven pump, reed beds and watery channels. Agriculture has never mastered these unique acres.
Studying the map, I see Thetford, Downham Market, Kings Lynn, Saffron Walden, March, Chatteris - all Fenland or East Anglian towns we have never seen. This was once the cradle of England's economic power - especially as the wool trade burgeoned in the fourteenth century. I think we will be back some day soon...
- February 14, 2010